Q1: Can you tell me about yourself as a musician, how you got started in music and why?

A: I actually had wanted to play the piano for a very long time. I started taking lessons when I was 10 up until college. I think I’ve always been drawn to the piano, the keys and have always thought it was so interesting to be able to press the key and make the sounds. As [with] everything you know over time that relationship will change, and my relationship with the piano has changed. The piano is a means of expressing the music that I love to study and perform. And just making the different sounds and exploring the emotions composers have put into music. 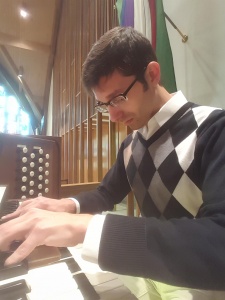 Q2: Why did you choose to do a show for Valentine’s Day?

Q3: How did you choose the music for your recital?

My program underwent so many changes and at first, I originally said I’m going to do a Valentine’s Day recital but only one piece will relate to Valentine’s Day. I changed the program and now all of the songs deal with some kind of love. The first three pieces I’ll perform talk of the story between Robert Schumann and Johannes Brahms. Robert Schumann was married to Clara Schumann and it’s well known in the music world that Robert and Clara Schumann were a marriage that was not endorsed by her father. It’s almost a Romeo and Juliet type story, in a way where they made it happen against his will. Johannes Brahms is a very good friend of Robert. Clara and Johannes ended up having their own sort of intimacy, although nothing was scandalous. It is known that Brahms was extremely fond of Clara Schumann and both Robert and Brahms’s music is really kind of centered on this emotional turmoil.

Robert Schumann was considered crazy because he heard voices and he had imaginary friends. In his music you can hear this sort of strife contrasted with this sort of prayerful music, which is oftentimes associated with his love for Clara Schumann. Brahms is a romantic and lots of music that sort of probes life in an existential way and even in Brahms’s music there’s a lot of themes, motives and ideas that oftentimes get associated with this sort of Clara Schumann infatuation that he never got to realize in his life. So those three pieces came as a set to describe the sense of true love. In one case, a sense of passionate love that was fulfilled in another, an unrequited love. The other two pieces are pieces that were dedicated to the composer’s wife Clara. They’re both American pieces and it seemed like a nice sincere gesture to add these pieces to fill out the program.

A: The one thing that has struck me as I prepared the recital is I’ve not been necessarily thinking specifically how these pieces connect to Valentine’s Day, but how they connect to the themes of love and romance, which we associate with the holiday. The Brahms and Schumann pieces are interesting in that they’re very intimate and introverted compositions, and at times the music is very outward and it sounds very loud and bombastic. To me when I play the music of Schumann and Brahms it’s like I’m opening up their diary and reading a page from it. The music is intimate and it’s finely crafted. I just found this extremely contrasted with the final piece on my program, which is a piece by Vincent Persichetti. It is an extremely extroverted composition, and it’s almost prosthetic in a way. I like that I’m closing with this piece, because it closes with a psalm. I am planning to change instruments specifically for the last piece. We have two pianos in the recital hall, one is a smaller piano, which I would consider more intimate, and the other is very large grand piano, which I think is a symphonic instrument.