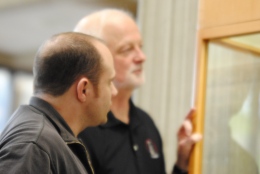 Dan McCormick (left) and Bob Ault discuss the “Ash and Smoke: The Holocaust in Salonika” display on the first floor of Maag Library. Photo by Sarah Perrine/The Jambar.

“Ash and Smoke: The Holocaust in Salonika” is more than a documentary seven years in the making. It kept Saul Friedman, its writer and creator, fighting through his battle with Parkinson’s disease.

Friedman, a retired Youngstown State University history professor, has written 11 books, mainly focusing on the Holocaust. He also has written and produced 13 documentaries and has received five regional Emmy awards.

“Ash and Smoke” focuses on the Greek Jews and their experiences in the Holocaust.

Bob Ault, serials and microforms librarian at YSU, worked with Friedman on the documentary.

Ault said he felt passionate about the documentary and shares it with his fellow colleagues.

“I showed it to everyone in the library. I say, ‘You think you had a bad day? Look at this.’”

The documentary first aired April 12 and will air again Thursday on PBS at 8 p.m.

In 2006, after his retirement, Friedman said he felt the Greek story of the Holocaust was understudied and wanted to do something about it.

That’s when he decided that he wanted to produce another documentary. With funding from the Center for Judaic and Holocaust Studies, Friedman took a group of YSU students to Salonika and Auschwitz in 2007.

During the trip, they collected research, which appears in the documentary.

After traveling with students to collect data, Friedman was able to create an outline for what would become his last documentary.

Friedman tried to fight through the illness to complete his documentary, but his disease significantly slowed its progress.

In 2010, Friedman knew he would not be able to complete the project on his own and turned to Ault for help.

“It was liberating. [Friedman] wanted to finish, and he stuck it through until the end,” Ault said. “[Friedman] came to me and said, ‘I need you to help me get this done,’ and I said, ‘Sure.’”

Ault gladly accepted the challenge, but he was unaware of how much work still needed to be done.

“It was interesting because I knew I was the puzzle piece that was missing, and he was so frustrated because he would have good days and bad,” Ault said.

The students turned in a 20-page script to Ault.

Ault added to the script using research he completed through resources at YSU. He said a heavy amount of the contributions came from Maag Library, the history department and the Center for Media and Academic Computing.

In addition to working with just the scripts, Ault had to find the tapes of the trip for the photos. Locating the tapes was a daunting task on its own, Ault said.

Ault also regularly met with Friedman to go over his work and the script he was creating.

“[Friedman] started, and he would come in with a cane, and we could get maybe 40 minutes and the shakes would come, and we would have to stop,” Ault said.

Ault said it was difficult trying to write the script in the way Friedman intended because of the limited amount of time he had with him. When Ault went off track, he often turned to Friedman’s “A History of the Holocaust” and would reread the chapter on Greece.

“The chapter of the book helped me because, when I couldn’t talk to him, I could use his book and his words and get the focus,” Ault said.

After nearly a year of work and research, the 20-page script transformed into a 55-page script, and Ault officially took on the titles of co-writer, co-producer and director of Friedman’s documentary.

With the heavy workload of such a large documentary, Ault reached out to other faculty members.

Dan McCormick, a network administrator, helped with the editing and visuals. Brian Bonhomme, an assistant history professor, was asked to narrate.

Ault, Bonhomme and McCormick worked for a year to complete the documentary.

McCormick said he enjoyed working with a faculty member he had never met before.

“Working with Bob was really easy. He did his homework, and more or less left all the technical stuff to me. He made my job easier by having his facts straight and doing all his research,” McCormick said.

During the fall semester, Kridler attended the Last Lecture of Stephen Gage, professor of music and director of bands.

“You don’t find many people who are really happy in their jobs, but look at him. He’s so happy to be teaching college students,” Kridler said of Earnheardt.

Bryan DePoy, dean of the College of Fine and Performing Arts, was also in attendance.

“Given Dr. Earnheardt’s dedication on student success, he was a great fit for this seminar,” DePoy said. “It’s a benefit to students and faculty alike.”