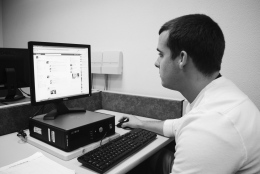 Youngstown State University senior Bill Rees found himself checking his Facebook profile in the YSU Info and PC Lab when he should have been studying for his genetics final.

Rees works three jobs on top of being a full-time student. He insists that his busy schedule requires him to have good time management skills.

But, he said he cannot escape the temptation to take 15 minutes to check his Facebook or Twitter page.

“When I study, and I’m by a computer, I find myself taking breaks,” Rees said.

Rees said he doesn’t see his Facebook usage as a problem because it usually doesn’t get in the way of completing his schoolwork.

“Facebook, to me, isn’t a bad thing as long as you get your work done,” Rees said. “But when you start procrastinating with it, you can lose track of time.”

Facebook claims that 483 million of its 845 million active users are active on the site every day.

According to a study done by the Pew Research Center, 80 percent of Internet users between the ages of 18 and 35 used social networking sites in 2010 — a jump from 63 percent in 2008.

He said he thought it would be simple — until he started receiving updates weeks after he deactivated his account.

“I thought it was going to just be completely deleted — just like that,” Boughter said. “It asked me for password confirmations multiple times, and then I had to send in a request for removal without the option of recovery.”

Boughter said he is glad he’s not addicted to checking Facebook all of the time for updates.

To stay focused, he has been studying at Maag Library.

“I definitely find myself less distracted down there,” Boughter said.

At some places on campus, students can escape digital procrastination.

“[The Center for Student Progress] is a place that people come to study,” said Robin Sakonyi-White, assistant director of supplemental instruction and student tutorial services at CSP.

“They know this is an academic setting.”

At the end of the semester, students come to CSP for course review and additional tutoring. After working with students all semester long, tutors work with professors to identify material needed to create a course review session.

“We offer review sessions all year, but at the end of the semester, they are more cumulative,” Mark-Sracic said.

Sakonyi encourages students to seek help throughout the semester, but said CSP can provide last-minute help to anyone who comes in.

“At this point in the semester, it can be challenging for a student to catch up,” Sakonyi said. “Some come at the end of the semester, and we do what we can for them.”

Boughter, who decided to keep his Twitter account, admits that he is still distracted by social networking, but finds that having only one active account decreases the amount of time wasted aimlessly browsing and procrastinating.

“Twitter is just as bad, but what can you do?” Boughter said.

Amanda Shuttleworth, a senior nutrition student, said she also deleted her Facebook and that it hasn’t affected her focus.

“It hasn’t really affected me when I’m trying to get work done,” Shuttleworth said. “I am just as distracted by Twitter.”

Shuttleworth said she finds herself less distracted by social networking sites than when she started school in 2008.

“I guess I don’t care as much about what people are doing as much as I used to,” Shuttleworth said.