After entering Steel Valley Nightmare and Escape, players must unlock the demons that possess the house of 817.

Steel Valley is a horror-themed live gameplay escape room in Girard — about eight minutes away from Youngstown State University. Players have an hour to find clues, solve puzzles and ultimately escape the demons that lurk in the darkness.

There are three ratings: PG, R and X. While PG can be considered family-friendly, X-rated provides an experience with adult content.

To enter this attraction, players must first choose their level of scare.

Then, they must choose from three difficulty levels: easy allows three clues, medium allows hints to two puzzles and hard offers no help.

Reservations must be made in advance to book the challenge, and at least two people must play, but there is a maximum of eight players.

This is the third theme the owner, Paul Patterson, has developed since it opened in August 2017. 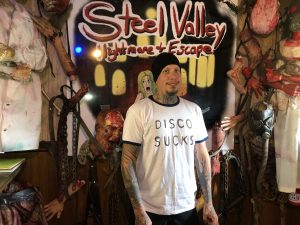 Jambar TV anchors Rachel Gobep and Brandon Terlecky tried to escape from Steel Valley Nightmare and Escape but failed. Their best reactions will be featured in Jambar TV’s special Halloween episode on YouTube.

Though they chose X-rated, they chose the easiest difficulty and were able to ask three questions to help them escape.

Read their firsthand accounts of “Escape 817” below:

RACHEL GOBEP: The minute I stepped into Steel Valley Nightmare and Escape, I felt uneasy but in a good way.

The escape room is unlike any experience I have encountered in my life, and it definitely is not your typical escape room. Not only was I trying to escape the room, but I was trying to escape Elizabeth — the demon that made me live my worst nightmare.

This makes the experience 1 million times better because it is so much more difficult to concentrate when you know that at any moment you might be caught off guard and be absolutely terrified to even move.

Brandon Terlecky attempted to help me escape, but I ended up being his knight in shining armor — opening the locks, going first into rooms and even deciding to separate myself from him and our videographer, Collin Headley, to try and win the game.

Brandon cowered in fear and even hid behind me, but his reactions were priceless, and I’m so happy I got to tackle this challenge with him.

“If you think I’m stepping over there, you are out of your mind. It’s not for the camera. It’s not for anything,” he yelled, as I was trying to get him to help me find a clue.

Ultimately he screamed, “Why did I agree to this?”

Although we didn’t win, I am craving more and even conquered some of my fears. From the minute I left Steel Valley Nightmare and Escape, I couldn’t stop talking about it because it is so exhilarating.

All I can say is I’ll be back soon.

BRANDON TERLECKY: Anyone who is looking for a fun and inexpensive Halloween haunt experience in 2019 should add Steel Valley Nightmare and Escape to the list of things to do in the Valley.

We hear so much about haunted house experiences that we have around us, but nothing really puts you in the driver’s seat while fearing what characters lurk in the darkness around you at the same time like Steel Valley does.

You may have heard of simple escape rooms that leave you feeling nervous or high-strung as you look for a key to get into the next room, but you have not had a storyline of crazed serial killers or a woman that follows you through every room as you have to search for hidden clues at the same time.

When I first entered the room with my partner in crime, Rachel Gobep, it was easy to point out who was going to be the hero when it was all said and done.

Rachel took over the game while I was glued to her side waiting for the next scare to pop out of wherever we were. Everytime something bumped or moved, I was jumping out of my skin.

This was an overall tremendous experience, and we had a blast in the end. The owner delivered a safe, scary and enjoyable time for all of your friends to enjoy.

As we got to the end of the game and the hour was winding down, we were unable to finish the challenge. However, when it finally came to an end, I was a little disappointed because I wanted to keep going.

Although I was in a frenzy when we began, this was one of the best experiences I have had in quite some time. Escape rooms should leave you wanting to come back. Steel Valley Nightmare and Escape does just that.

When you walk in, you are already in trouble in the best way possible. It will have you begging for more once you walk out the door.