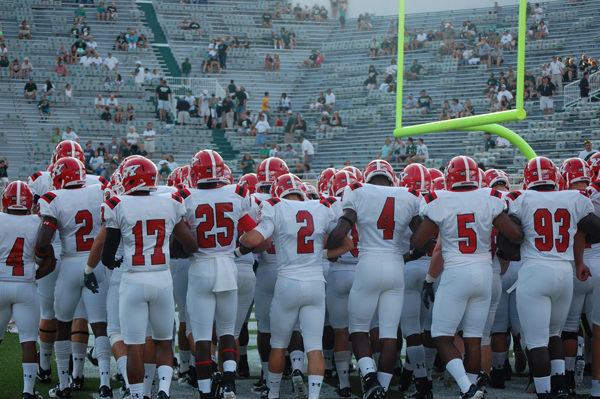 Two years ago, Youngstown State University visited Michigan State University in the season opener with excitement about playing against a Big Ten program.
This time, it’s a little different.
“Being a senior, it’s a game,” quarterback Kurt Hess said. “It’s a game that you want to win. It’s a game that will take you to your goals. It’s the next step. It’s about going out there as a team, doing what you’ve been coached to do, trying to reach your potential and see what can happen.”
For senior defensive tackle D.J. Moss, it’s a combination of excitement and focus. Moss did not play in the in 2011 opener due to a concussion. The Penguins did not want to risk another concussion that could have sidelined Moss for the year.
“I did go through the warm-ups and got to see the locker rooms,” he said. “That still kind of left a sour taste in my mouth, because I still haven’t been able to play out there. I’m excited for the opportunity.”
YSU battled the 17th-ranked Spartans and trailed by eight in the third quarter before losing 28-6. What may help the Penguins is that the game is not a season opener, defeating the University of Dayton and Morehead State University in the two weeks prior.
The Penguins defeated the Eagles, 67-13, on Saturday at Stambaugh Stadium. The offense compiled a school-record 718 total yards with 359 yards in both the passing and rushing games.
The Spartans (2-0) could be a tougher test. In victories over Western Michigan University and the University of South Florida, MSU has allowed on average 50 rushing yards, 129.5 passing yards and 9.5 points per game.
“They’ve got a really good defense,” head coach Eric Wolford said. “Statistically it shows, but on film it shows up more. They’re stout. They’re a physical group over there.”
YSU has also been effective on defense. The Penguins have allowed 23 points, 198 rushing yards, 363 passing and three touchdowns this season. Wolford said the game could come down to the line of scrimmage.
“They got some big old boys on their offensive line,” he said. “Over a course of four quarters, can you match up? Can you match their physical play for 70-75 plays? That’s going to be the question. I like physical football, we talk about being physical all the time, and I think this is a really good test to see how physical we are.”
After the Spartans battle with YSU on Saturday, they will face the University of Notre Dame. There is a chance MSU may overlook this week’s game, but Hess hopes they are at least giving the Penguins respect.
“Hopefully they’re giving us our due’s respect, because I think we’re a pretty good team,” Hess said. “When we put it together, we can be a good team. It’s easy to overlook sometimes, but they’re a mature team. I’m sure they’re not doing that.”
Kickoff is at 2:06 p.m. and will air on the Big Ten Network along with the call on 570 WKBN and iHeartRadio.com.
“We were a really young football team then,” Wolford said, regarding the 2011 matchup. “When you have a really young football team, a lot of those guys that were freshmen and sophomores are still out there on that field. We’re older. We’re more mature.”