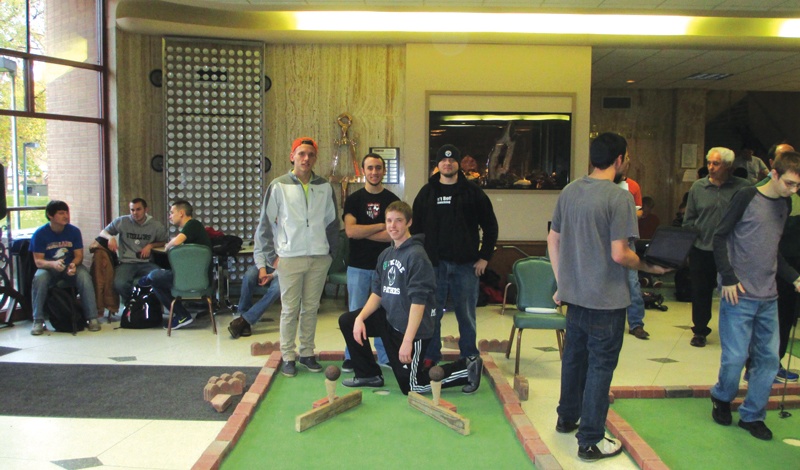 First-year Youngstown State University engineering students put their skills on display by demoing their projects to Creekside Golf Dome representatives in Moser Hall on Nov. 21.
Kerry Meyers, director of the first-year engineering program at YSU, said Creekside Golf Dome tasked groups of four to five students with designing mini-golf holes.
“[Creekside is] creating an indoor mini-golf course,” Meyers said. “There [are] maybe 50 or 60 teams and they collected nine designs that [Creekside] will build.”
Jeremiah Kibler, a first-year YSU engineering student, said that groups had to build both a digital model and a full-sized prototype for representatives from Creekside to judge.
“We had to go on the computer and do a computer-aided design of our hole and then, on presentation days, we had to go out and build a full-sized prototype,” Kibler said. “We did a YSU themed design. … We used brick and sheets of turf they put on mini-golf holes.”
At the demonstration, each student group had a member putt the ball six different times to showcase the workings of the course to on-looking judges.
Creekside also gave students a list of criteria, such as size limitations and pathway requirements, to meet in their designs.
“The perimeters were that it had to fit on a six foot by 25 foot sheet of mini golf AstroTurf, there had to be at least two different approaches to get to the hole, there had to be some sort of elevation, and some sort of blockage in the course that required you to bank the shot off a wall or a penguin as the case may be,” Kibler said.
Josh Durig, a YSU chemical engineering student and a designer in one of the nine winning groups, said Creekside chose his team based off their more straightforward design and the diversity of its two pathways.
“Our hole had a bank on the right side, and the people from Creekside said it was probably one of the best they had seen because it kept the balls away from the bricks, which is crucial for what they are looking for. They said most holes were too complicated and ours was a little more simple. They liked that one side was better for less experienced players and the other side was more for players that have a little bit of experience,” Durig said.
Student groups will have another chance to take part in the construction of the course. On Thursday, Creekside will return to see student ideas for the overall layout of their indoor course.
“We are working on a layout now of the nine winning teams. All of the teams in the honor section are coming up with their idea of how Creekside should layout the course,” Kibler said. “Even if you didn’t make the best hole design, you still have the chance to make the best golf course layout.”