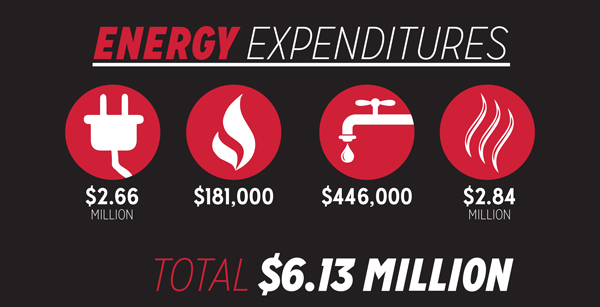 After a blow to the university’s total revenue due to decreased enrollment and reduced state funding, Youngstown State University has a compelling reason to take further steps to conserve energy.
“Over the past five years or so, we’ve really embraced [energy conservation] for a couple of reasons,” said John Hyden, director of university facilities. “One, it’s good for the environment, and secondly, it’s important for us from a budget standpoint to save as much energy as we can. The cost of energy keeps going up.
It’s imperative now, with budgets as tight as they are, that we squeeze every nickel out of it that we can.”
For fiscal years 2012-13 the university spent $6.13 million on energy — spending $2.84 million on steam, $2.66 million on electricity, $446,000 on water and $181,000 on natural gas.
Bill Haas, director of engineering at the facilities office, explained that YSU has a contract with EnerNOC, a company that gives YSU an incentive to curtail energy. Just for participating in EnerNOC’s curtailment program, YSU will receive $38,000 this year. The university will then get paid an additional $1,000 per saved Megawatt-hour. For this fiscal year alone, YSU has avoided an estimated $168,000 in electrical charges.
“Companies like EnerNOC are able to ask customers to save. They pay us to reduce the energy. They then sell the energy back,” Haas said.
Five years ago, YSU entered into a performance contract with Johnson Controls, a company that also guarantees the university savings. Their initiatives have saved the university roughly $1 million per year.
“It’s a $10 million project,” Hyden said. “[Johnson Controls] put $10 million worth of investment into the university in terms of new equipment — which is going to be energy efficient equipment, lighting, various different control schemes, and variable speed drives and what not to make our mechanical and electrical systems more efficient. We spent about $10 million and in about ten years, they will pay all of that off.”
The office of facilities has also made regular, day-to-day repairs that save energy. They have replaced mercury vapor lighting in Beeghly Center and Stambaugh Stadium with energy-efficient, fluorescent lighting and have installed LED lighting in the M2 parking deck in order to save on electricity costs.
Because the cost of energy has increased, and the university has expanded their square footage by building the Watson and Tressel Training Site and the Williamson Hall, YSU’s efforts to reduce energy consumption have not led to a
decrease in the university’s cost of operations.
Hyden also said that energy conservation leads to compromised comfort.
“With the way our budgets are shaping up, we’re going to have to make more compromises. We’re very accustomed to having things the way that we want them. We’re going to have to curtail that. We’re going to have to cut back. We’re going to have to work at the fringes of comfort,” Hyden said. “We’ve got to change the way that we are operating and immediately.”

Michael Orto, manager of the facilities office, agreed with Hyden.

“The bottom line is we need to keep the lights on, but we also need to keep tuition down, and that’s directly tied,” Orto added. “If we don’t conserve, imagine what could happen to tuition.”

The office of facilities has received complaints for their conservation of energy. Energy saving initiatives have particularly affected professors conducting research in Ward Beecher Hall.

“I just know that we are accustomed to temperatures and the climate conditions within our laboratories changing on a regular basis. Some days, it will be nice and cool; some days, it will be very warm,”said Chester Cooper, professor of molecular and microbiology. “Probably the biggest thing that concerns me is that we have freezers and when it’s hot in the lab, it makes them work harder. And, in some of our freezers here in this area, we have tens of thousands of dollars worth of materials in those freezers,”

David Asch, professor of molecular and microbiology, said it takes money to run these freezers.

“A lot of times, energy savings can be false savings. When we turn off the air conditioning, all of our compressors and freezers work that much harder and they … take up more energy than they normally would themselves,” Asch said. “Also, we have some really expensive equipment that ‘okay we’ve saved a few thousand dollars on the electric bill, but we’ve ruined a piece of equipment that costs $100,000.’”

The office of facilities acknowledged that they have received complaints.

“We’ve had complaints, and sometimes they’re legitimate complaints. Sometimes, it’s just people — in the culture that we have here, we have some people that are just spoiled,” Hyden said. “Some people are unreasonable.”
Haas added that the office of facilities cannot solve every problem.
“We can’t control everything that’s going on in every room across the entire university. There are things that are going to happen,” Haas said.