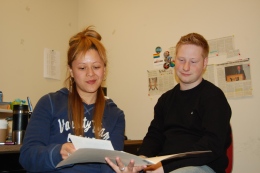 Youngstown State University sophomore Tim Bortner admits that he was bullied throughout high school; the experience was a silent struggle.

The silence stops here for YSUnity. The organization is preparing for its fourth annual Day of Silence on Friday.

The Day of Silence is a national youth movement to bring awareness to the silence that the lesbian, gay, bisexual and transgender community members face each day.

At YSU, participants will paint The Rock at 8 a.m. YSUnity will also have an information table set up from 9 a.m. to 3 p.m. A candlelight vigil will take place at 3:30 p.m.

“I hope that we come across as groups of individuals trying to peacefully protest the bullying so many kids nationwide are struggling with,” said Lisa Ronquillo, YSUnity’s president-elect.

According to the 2009 Gay, Lesbian and Straight Education Network National School Climate Survey, 84.6 percent of LGBT students were verbally harassed, while 40.1 percent had been physically harassed.

More than 70 percent of students said they heard homophobic remarks, such as “faggot” or “dyke,” according to the 2009 GLSEN survey.

“We can’t have this anymore,” Ronquillo said. “No one should ever … feel that tortured and that bullied that there is no light at the end of the tunnel and no way to go on with life.”

Ronquillo, a nontraditional student and lesbian, said she moved to the area from New Jersey, looking for an active and open group to join.

She said she’s dated boys, but was confused emotionally.

“I tried to date the gay out. I went to 15 years of Catholic school, and I didn’t want it. But I never got to that level where I fell in love. I didn’t feel butterflies with a boy like other girls around me did,” Ronquillo said. “When I finally started to just accept myself, that’s when I started to feel the butterflies, and that was the best feeling in the world.”

“I met [members of] YSUnity, and they were there waving their rainbow flags. It was like a beacon of light,” she said.

Ronquillo said she hopes to end the nonsense and ignorance at YSU.

“I want people to realize it’s time that we start looking at each other as people and not just, ‘You’re gay, you’re weird, you’re emo’ … whatever,” she said. “Underneath it all, you’re a person.”

Bortner said it’s frustrating when people try to get the silenced members to talk during the silent protest.

“You deal with a lot of ignorance with it,” he said.

Ronquillo said she is conservative about public displays of affection with her girlfriend. She said the judgment she feels from the student body causes her to feel more reserved.

“A lot of us haven’t evolved yet from the stereotypes, and I’ve noticed a chance with myself,” she said. “I feel a lot more clammed up here.”

Not every member is like this, though. Current YSUnity President Ken Holt and his boyfriend, Tom, hold hands publicly.

In one instance, Holt said he was criticized on campus for his public affection. He now feels that he has to look over his shoulder when he and his boyfriend are together on campus.

When incidents like Holt’s transpire, Bortner and Ronquillo agree the Day of Silence has yet to accomplish its goal of ridding ignorance.

“I don’t think everyone cares, but that doesn’t mean we should stop doing it, Bortner said. “Eventually, someday, it may catch on.”

Bortner said that even though he told students and his professors, he decided to be silent last year because they still looked at him differently. He said it often feels like he’s still in high school.

YSU student Kevin Grischow said he would agree if LGBT members said he was judgmental.

“It is different than high school. I try not to judge them, but I do,” he said.

“I mean, to each their own,” she said. “Whatever makes them happy.”

However, junior Sam Hogan said it is presumptuous to assume that everyone is judging them.

“I wish that we would just get along,” Hogan said. “Why do we have to keep labeling our differences?”

Student Chris Nutter said a way should exist to integrate different orientations to be tolerant of one other.

“Maybe some straight people want to be tolerant but don’t know how to and are afraid of socially offending a person,” Nutter said.

Ronquillo said she remains motivated throughout the adversity.

“I am all about being the change you want to see. You can’t shove it in people’s faces and force them to understand, but you can have people adapt to knowing we’re just like you,” she said. “We’re normal. I hate the word ‘normal,’ but we love just the way you guys love. We’re not here to hurt anyone.”

YSUnity adviser Brian Wells said he could relate to the members’ concerns. He was the president of YSUnity when he was an undergraduate student and said he came out to himself but waited another three years before he could summon the courage to come out publicly.

Wells said that while he would like to participate in the Day of Silence, he has classes to teach. He encourages non-participants to at least honor the day.

Bortner and Ronquillo said it’s sad that members of the LGBT community still have to fight for human rights.

“Oh, because we’re only half human? I laugh about it because it’s so ignorant, and it makes me tired,” Ronquillo said.

Wells said that although LGBT culture is now integrated into society, people forget that it is still a problem.