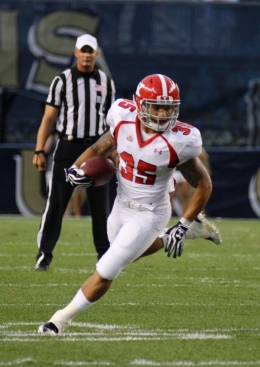 Standing at the lectern in front of the media following the Penguins’ 27-6 victory against Indiana State University on Nov. 17, Jamaine Cook, Penguins’ running back, had just rewritten the Youngstown State University record book.

Rushing for 124 yards and adding 19 receiving yards, the senior from Cleveland broke YSU’s career all-purpose yard record of 5,128, which had been held by Tamron Smith since 1993. In the process, he also topped the 4,000-yard rushing mark, becoming only the second player in YSU history to achieve this feat.

“It’s a great accomplishment, but it’s not something I necessarily kept track of,” Cook said. “It feels great, but at the end of the day, I’m just out here trying to make plays for my team.”

Throughout his four years as a Penguin, he made plenty of plays, but head football coach Eric Wolford said he valued Cook’s character as well.

“He’s kind of the role model for what we want from our program,” Wolford said. “Guys who like to go to class, guys who like to do things the right way, say, ‘Yes, sir’; ‘no, sir’; ‘yes, ma’am’; ‘no, ma’am.’ [Guys] who are accountable, don’t get in trouble off the field and all those kind of things.”

Unfortunately for Cook, he never had a chance to compete in postseason play at YSU. Still, rather than pity the subject matter, he expressed his gratitude toward the university.

“I’ve had a long journey here at Youngstown State,” he said. “I’ve been very productive and to think that it’s coming to the end of my four years here, it’s kind of heartbreaking because I love this place.” However, Cook may have a chance at playing on the national stage.

Recognized by various websites — including CBSSports.com — as a “top small-school prospect,” Cook is a “good prospect,” said Bo Marchionte, owner and founder of College2Pro.com.

“In terms of a player, he has good vision, hits the hole fairly quick,” said Marchionte, whose website scouts and analyzes numerous NFL prospects. “He’s not known as a burner, but one thing I like about him, he’s always leaning forward.”

While Marchionte compared Cook to Baltimore Ravens star running back Ray Rice, he added a comparison to Detroit Lions rookie running back Joique Bell. Bell came out of Division II Wayne State University and has found success in his brief NFL career.

But like Bell, Marchionte said it will be important for Cook to gain exposure in the months leading up to the NFL draft since he’s from a less-recognized school.

“The key thing for Jamaine is going to be how much exposure he can get, if he can get into any all-star games,” he said. “Once you get invited to one of those all-star games, you have coaches and scouts all seeing you up close, and that’s just great exposure. … If not, then a lot will depend on his pro-day.”

For an early draft projection, Marchionte — who is also a member of the Pro Football Writers of America — has Cook slated as a possible seventh-round pick. But he added it is more likely for Cook to go undrafted, which is not necessarily a bad thing.

Being what Marchionte calls a “priority free-agent,” Cook could choose the best option rather than get drafted into a bad situation.

“Teams aren’t stupid,” Marchionte said. “If they know they don’t have to waste a draft pick on him and can get him as a priority free-agent, then they’re better off that route.”

“He does have the skill set to do it,” Marchionte said. “He’s going to go off, work out — all that good stuff. Plus, he has a good head on his shoulders. He’s an intelligent kid.”