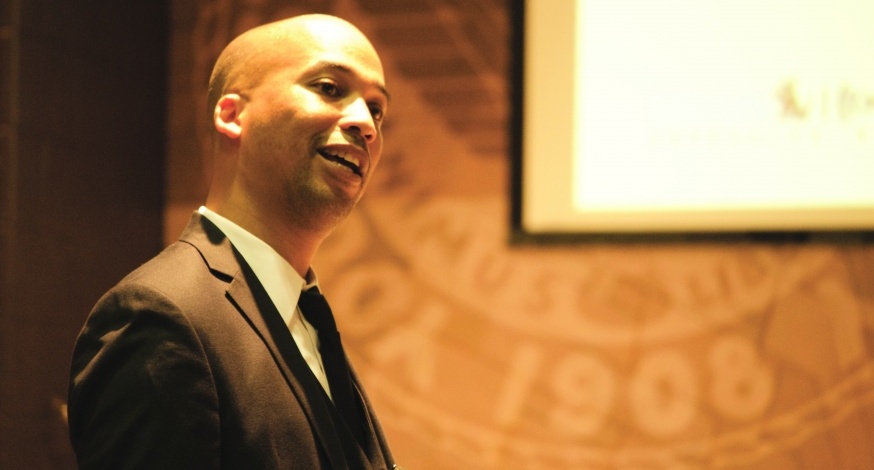 David Anderson, founder of the Empowerment Radio Network, spoke to Youngstown State University students Thursday about empowering themselves through entrepreneurship.

Later that evening, he hosted a screening of the documentary “Generation ONE: The Search for Black Wealth.”

The documentary featured Anderson and others discussing the lack of generational wealth in black communities.

The film attributed this to a culture of spending in black communities and a lack of proper financial education, as well as government transfers of wealth to white Americans through programs like the Federal Housing Administration and the GI Bill.

“The black community is dying because of a lack of information,” Anderson said in the film.

At a seminar held Thursday afternoon, Anderson outlined a number of strategies students could use to start building wealth while in college. These included purchasing cars or the contents of storage lockers at public auctions and reselling them online at sites like Craigslist.

He said learning to spot opportunities should be part of the curriculum at all institutions, and it’s more important than having a job.

“I’m not saying don’t get a job,” Anderson said. “I’m saying train yourself to identify opportunities.”

He also underlined the need for students to acquire skills while they’re in college.

“Do not go through YSU and not get a specialized skillset,” Anderson said. “Especially if you’re black.”

He said that in a labor market where people are often hesitant to hire young black people, possessing a specialized skill can greatly increase your likelihood of finding a job.

He related the need for wealth to the Black Lives Matter movement, and said that if students want power, they need to own things.

“You don’t have the right to put your fist in the air and say my life matters if you don’t own resources. That doesn’t make any sense,” Anderson said. “Control the resources, and then you can influence what’s going on.”

Julian Jones, president of the YSU Student Diversity Council, helped bring Anderson to campus. He spent the day with Anderson and said it was great to hear different ways to be successful.

“I think it’s imperative that we learn — and not just African Americans but all of us as Americans — how important it is to be financially stable,” Jones said.

“We go to college, we get into debt, we don’t get a job coming out of college, so we start off bad because we’re already in debt,” Jones said.

He told students that they are where they are because of how they have chosen to use money, and said changing those habits will make things easier for future generations.

“Those who come after us won’t have to rebuild the bridge because the bridge has already been built by you,” Blake said.