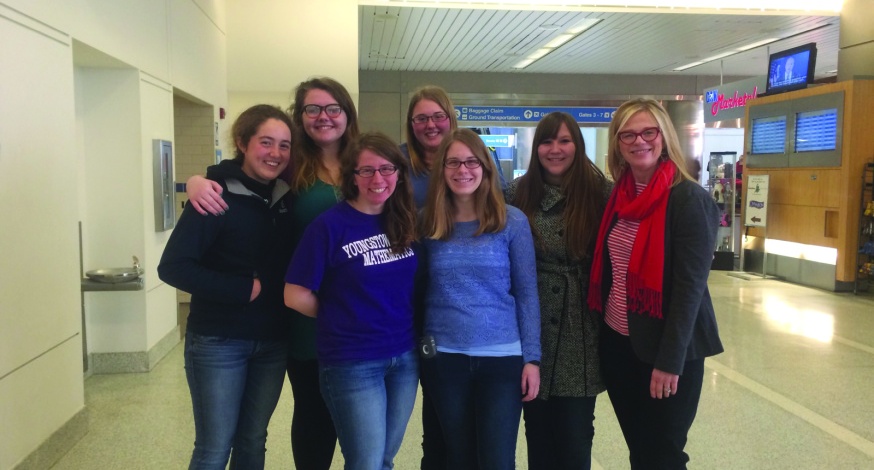 Six students from Youngstown State University attended the Nebraska Conference for Undergraduate Women in Mathematics over the weekend. Each student presented their original research in the mathematics field.

The conference took place from Jan. 29 – Jan. 31 at the University of Nebraska-Lincoln. The overall goal of the event is to help undergraduate women network with professional female mathematicians, gain feedback on their research and acquire self-confidence needed in a mathematics career.

Angela Spalsbury, chair of the department of mathematics and statistics, said she has attended conferences with her students since 2001.

“I can honestly say that I have never been with such a better group overall,” Spalsbury said. “Their presentations were extremely impressive and made me very proud to be from YSU.”

Spalsbury and Alicia Prieto, assistant professor of mathematics, encouraged their students to register for the conference. Crystal Mackey said she was advised to attend the conference by her advisers in the Pacific Undergraduate Research Experience in Mathematics program.

Mackey’s research was titled “Numerical Results for the IVP to the Burgers Equation with External Force”. She started her research over the summer at the California State University while working with researchers in the Research Experience for Undergraduates program. Her project simulated traffic flow using numerical methods.

“I presented to the largest crowd I have ever presented to before, and it felt like a great achievement,” Mackey said. “A faculty member of [the university] came up to me and said the presentation was really good.”

It was the last time seniors like Ashley Orr could present at the conference. Orr said it was an amazing experience, and she enjoyed seeing what her peers in mathematics have accomplished.

“It’s geared towards women in mathematics because, historically, there has been such a lower concentration of female mathematicians,” Orr said. “The conference worked on female empowerment in the field, and also seeing what undergraduate research women are becoming involved in.”

Orr’s presented her research titled “A Study of Youngstown Public Housing Program Participants’ Preferences”. She said the objective was to mathematically measure the preferences of low-income individuals in Youngstown.

Busser said the NCUWM was a unique and friendly conference, and the participants expressed excitement to hear the presentations, instead of trying to compete with others.

“Math is a very male-dominated field, so it was cool being around only females who had gotten their PhD, who are examples of success in the field, or women who are in the same position as I am, in an undergraduate position where there’s not a lot of females,” Busser said.

She said none of the girls believed the stereotype that women aren’t as good in math as men, but it was empowering to be at the all-women conference.

Busser’s research was titled “Unique Hamiltonicity and Computational Algebraic Geometry”. She began her research over the summer while she was working at a university in Hawaii with the program REU.

She demonstrated a researcher’s proposition stating that a graph can be converted into a set of polynomials and by solving that set, the number of Hamiltonian cycles in it can be revealed.

“We looked at those types of graphs to see if we could find any that were uniquely Hamiltonian and didn’t, but it was neat to be able to take those kinds of ideas and turn them into an algorithm,” Busser said.

Hoopes presented her research in the form of a poster titled “Developing an Educational Sudoku Solver”. She created a computer program that can solve any Soduku puzzle. It gives players hints about what strategy to use when they are stuck on a puzzle. She said she felt inspired from her experience at the conference.

“For me, the conference really solidified the idea that I shouldn’t let anyone tell me what I can or can’t do,” Hoopes said. “I gained a lot more confidence in what I want to do with my life after seeing the fantastic mathematical projects other girls had completed.”