When Youngstown State University head softball coach Brian Campbell took over the program 10 years ago, it was in some rough shape.

In 2009, when he took over, the roster was rough and so was the play. The Penguins won just eight games that year to the tune of an 8-42 record but everything eventually got better. The team won 14 games in 2010 and then won 22 games in 2011. At that point, YSU and the program knew the decision to bring him in was the right one.

“We’ve taken the right steps,” Campbell said. “We had an opportunity to put a little bit more wins on the left side than the right side as far as wins and losses go. When you take over, you want to set a plan, have your steps and follow those steps all the way. This has been an opportunity that has gone every way I’d hoped.”

For Campbell, the wins are only a part of a much larger puzzle we all call life. For him, the wins don’t mean as much as other more important things.

“I think it’s a great step for the young ladies that had an opportunity to play at YSU for me,” Campbell said. “Being able to go out and compete and be able to achieve that, it’s easy to sit back. It’s an honor to be the winningest coach. It’s about the players and the assistant coaches that have been along with me. That’s the most important part for me.” 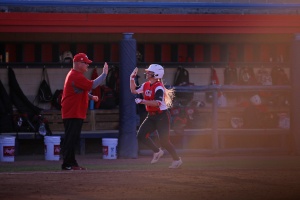 Besides becoming the all-time winningest coach in YSU history, Campbell has some personal history coming close as he needs six wins to get to 500 career wins.

“Being six away from 500, it makes you reflect back to the young ladies you had the chance to coach,” Campbell said. “The ones that have gone out and gotten their degrees that have gone on into their careers. Doctors, teachers and those things. It makes you reflect to one, how old you are. Secondly, of what the young ladies were able to do on the field but more importantly what they did with their degrees.”

With 209 career wins now, Campbell believes that wins don’t reflect anything more than how well these ladies have played, practiced and fought to get him those wins. Any good coach will tell you that wins don’t mean a thing without hard-working players.

“You come into college to the degree and education, you have an opportunity to do something that you love — the sport,” he said. “That’s very important. When you walk away, they are walking away representing themselves, the university and the program. It’s about excelling here but it’s truly about excelling in life.”

He said that he wants every girl to go as high as they can in their field.

“I want them to try and get as high up as they can and want to,” he said.

Now, Campbell still has a season to focus on as his squad is currently 8-12 before the bulk of the conference schedule begins. The Penguins have won three straight games before their first home weekend series against Indiana University-Purdue University Indianapolis.