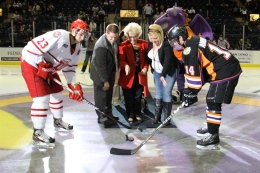 Members of Greek Life at Youngstown State University were recognized at the drop of the puck at Friday night’s Youngstown Phantoms game for their fundraising efforts.

About $1,200 was raised from sales of $10 Phantoms tickets, with $5 from each ticket going to Greek Campus Life.

The money will primarily fund Greek Sing, which takes place on April 7.

“Greek Sing helps the Greek system not only financially, but it brings attention to the philanthropic efforts and positivity of the Greek system as well,” said Miranda James, GCL co-chair and a member of the Zeta Tau Alpha sorority.

YSU President Cynthia Anderson was present at the ceremonial puck drop alongside James and Michael Koziorynsky, GCL’s other co-chair and member of Alpha Phi Delta fraternity.

“They continue to amaze me,” Anderson said of their fundraising efforts. “They do so much good for the community and are phenomenal members of the YSU family.”

Anderson said she noticed a lot of red and white in the stands and hopes to see the fundraiser become an annual event.

“I think our community really appreciates what these students do, and the number of participants increased significantly from last year,” Anderson said.

Koziorynsky said he likes to see members of Greek Life out in the community.

“It’s nice that YSU is so instrumental in the community at a place of business like the Covelli Centre that is a big part of the city of Youngstown,” he said.

Alumni from the fraternities and sororities showed up to provide support for their fellow Greeks.

Sigma Tau Gama alumnus Phil Rauscher said he was happy to see the university and Greek system supporting local groups like the Phantoms.

“Members of the Greek system already represent some of the best leaders that YSU has to offer,” Rauscher said. “We should not just represent YSU, but the community as a whole.”

“Events like these help to get more people involved and increase activity on campus,” Cullen said.