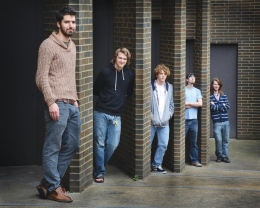 In the 1930s, French musicians Django Reinhardt and Stephane Grappelli introduced a new wave of music known as gypsy jazz that combined an upbeat swing style and intricate guitar playing.

“The idea of the group is that we play kind of like a Dixie jazz swing. Mostly it’s acoustic music,” Smith said. “We have a violin, a clarinet, an upright bass and two guitars. It’s a really intimate acoustic live setting.”

Smith, a guitarist in the group, said the most important part of playing gypsy jazz music is utilizing live performances. Most of the music that Knowledge Dropout plays is “dance themed,” he said.

“This style of music really grasps people’s interest. It has really catchy melodies, and it’s really upbeat music, so it’s really fun to play, fun to listen to and fun to dance to,” Smith said.

Doyle, who is studying jazz, said he is most attracted to the gypsy style because it fits well with the instrumentation available to the group through the Dana School of Music.

He said the way the style combines musical roots from France with new forms of music intrigues him.

“We’ve reworked a few pop tunes into the gypsy style, like Beatles songs and then pop standard hits,” Garwig said. “If you catch those melodies, you know them.”

While the band primarily covers popular songs, each member is also fluent in writing his own music. Doyle said it’s imperative to play original songs during lengthier shows.

Knowledge Dropout prides itself on being the only band at YSU, and one of the only bands in the area, that plays this style of music.

Francois Fowler, an associate professor in the Dana School of Music, said he has worked individually with each member of the band at some point.

Randy Goldberg, faculty adviser for Knowledge Dropout, said he remembers when the group came to him with the idea.

Since the start of the project, it has been rewarding to see the men “learn the nuances” of the music style and take a new, contemporary approach to an older style of music, Goldberg said.

The group members, he said, have learned to work together despite their different musical backgrounds.

“It takes a lot of dedication because you have to get in the mind of the musicians that made this 50 or 60 years ago, but put your own style of music with it,” Goldberg said.

Doyle said although band members get nervous in certain settings, they feed off adrenaline created by the audience.

“We just hope that we can reach out to as many people as possible and it will give us an opportunity to make more fans and invest more time in to playing live,” he said. “Our goal is to just play as much as possible and spread the word of good, joyful music.”