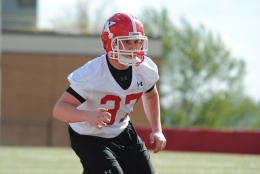 Junior linebacker Thomas Kipp runs drills during practice on Monday. Kipp practiced for the final time on Monday and will return to his home country of Denmark on Tuesday. Photo by Joe Catullo Jr./The Jambar.

When junior linebacker Thomas Kipp arrived at Youngstown State University in 2010, his dream was to suit up for the Penguins for at least one game.

Although he was just a walk-on, Kipp saw YSU as the best fit. The treatment he received from YSU personnel solidified his decision. Other universities offered scholarships, but YSU was one of the few Division I schools that showed any interest.

“He’s a guy that flies around, a guy that football means a lot to him,” Eric Wolford, YSU head coach, said in October. “He’s another spring away from just continuing to develop and do things we need him to do to be a contributing factor here.”

However, Kipp will never fully know what it’ll be like to step foot on the field on game day. He practiced with the team for the last time on Monday.

On Tuesday, a flight from Pittsburgh to Tranbjerg, Denmark, will bring Kipp home.

Kipp was eating breakfast before school started one morning when his dad had the stroke. He wasn’t able to fully comprehend what had happened until he returned home.

Kipp said he does not have a vivid memory of what happened but will remember that day forever.

Kipp didn’t feel comfortable discussing the details of his father’s illness, but said the stroke is still a contributing factor in his father’s medical woes.

During his final practice at YSU, Kipp said it felt different.

“Right now, it’s not the same feeling,” he said.

Kipp added that he will miss the players the most, especially sophomore offensive tackle J.P. May.

Kipp and May have known each other for about a year, and the two have become best friends.

Before YSU, Kipp played junior varsity and some varsity in 2006 and 2007 at Milwaukee Lutheran High School as a foreign exchange student.

Kipp was also a member of the Aarhus Tigers AFC before joining the Sollerod Gold Diggers in 2010.

The Gold Diggers won the national championship that year.

Wolford said “Kipp Dinger” was an experimental player and had a chance to play at least one down this year.

“He’s a guy we have fun with,” Wolford said. “We know that he’s a little bit of an experiment, but he’s done well for a guy who hasn’t played a lot of football. He wants to learn the game of football, but he’s got to attend his family.”

Joe Tresey, first-year defensive coordinator, also said Kipp was a pleasure to be around.

Wolford found out about Kipp’s departure roughly a week ago, but Kipp’s decision to leave was made a few weeks ago.

“I was not doing what I needed to do in school,” Kipp said. “I just spent a lot of time talking to people back at home. I would really love to stay here, but after a week or so, I kind of realized that that might not be the best decision, no matter how much I wanted it.”

It’s bittersweet for Kipp, who misses his family, yet homesickness has caused his grades to slip.

“If I really want to keep my life on track, I really need to get home,” he said.

Kipp has enrolled at the Aarhus University and plans to continue playing, and maybe coaching, the game he loves.

Kipp said school is part of the reason he is returning home. If it was only because of his father, Kipp might have stayed for another semester.