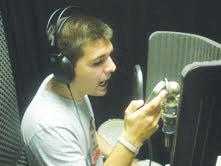 Drae “D-Rae” Smith awoke on Aug. 10, 2010, to a nervousness that pounded through his body. In just a few hours, the Youngstown State University student would be performing as the opening act for one of his idols, Wiz Khalifa, at the Covelli Centre.

It was the fruition of years singing into toy microphones and recording on his computer. But as the curtain rose that night, revealing an audience of thousands, the oppressive wave released him. He said he felt at home.

“It was a dream come true,” Smith said. “I knew at that moment that this is what I wanted to do for a living.”

Smith also opened for Wiz Khalifa on Sept. 28 at the Covelli Centre.

“I’ve seen Wiz perform 10 or 15 times,” Smith said. “I’ve been following him since he was starting out. So that was a great moment for me.”

Smith has also opened for Yelawolf and Machine Gun Kelly. His music has been played on JAMZ 101.9, a Youngstown radio station.

“I can’t say exactly why I love rap; I just love it. I love the wordplay, and I was obsessed with how you could use rhymes to tell a story,” Smith said.

Smith’s own story is equal parts talent and motivation. He is maintaining a 3.5 GPA in YSU’s marketing program, a skill he said he believes will set him apart from many other artists.

A self-proclaimed “nerd,” Smith said his education is a launch pad for furthering his music career; his objective is to learn all aspects of the music industry.

“It’s good to learn,” Smith said, adding that he wants to break the “rapper” stereotype by being a role model to his younger fans.

“I want to give the music a more intelligent face. Artists these days are smart, but you might not know it because they rap about money, drugs and women,” Smith said. “I want to change it to where you can listen to hip-hop and maybe learn something.”

He said if kids are going to look up to him as a role model, he wants to use this responsibility in a way his idols didn’t.

“A lot of rappers rap about dropping out of school and selling drugs. Maybe we should tell kids to stay in school and to get an education,” Smith said.

He has come a long way since recording into his computer as a high school freshman. Smith now records with Fynal Step sound engineer Jamie Ford.

Ford has been working with him since Smith was a junior in high school.

While recording “Call Your Name,” a song for Smith’s new mixtape, Ford provided feedback for Smith, and the two communicated through the soundboard.

“This is definitely a different side of D-Rae,” Ford said. Whereas the majority of Smith’s songs have a modern vibe to them, “Call Your Name” has an old school, hip-hop feel.

Ford said he believes Smith has what it takes to make it, and that he has seen significant progression since first meeting Smith as a high school student.

“He’s starting to get it,” Ford said.

“Call Your Name,” is a love song — not about a romantic interest, but rather a love song he wrote for the true love of his life: music. The first line of the song sets up how his love started.

“Since I was 4 years old, I’ve had this music in my veins. Now, I’m in my 20s. Not a single thing has changed,” Smith rapped into the studio microphone.

Although Smith carries the bulk of the responsibility in his project, he isn’t alone.

Brandenn Keylor, his lifelong friend and an exercise science major at YSU, and Austin Pence, his merchandise designer, joined him as he recorded.

All of them bobbed their heads as they listened to the recorded song, while Smith went through the motions of singing to a crowd.

“This is crazy. I mean, I’ve seen him from the very beginning,” Keylor said.

Smith’s friend Jon Louthan acts as his manager. Smith said Louthan has been there every step of the way.

The two became friends when they played football together in seventh grade.

“When we first started this, people thought it was a joke,” Louthan said. “Now, it’s cool to see him evolve and becoming a real artist.”

Louthan has a passion for music, designing and editing videos.

“It would be a dream come true if we can do what we’ve been doing on a professional level,” Louthan said.

He plans on helping Smith as his manager in the future.

Smith said he wants to use his music as a platform for his business, Keep It Movin’ Music, which is both a record label and a movement.

His inspiration, he said, comes from merging his two talents: music and marketing.

“Life keeps moving. You might go through a death in the family, or have no money. There are problems everywhere, but you have to keep it moving through the problems,” Smith said.

Smith said he hopes to inspire all listeners to pursue what they are passionate about.

“A lot of people, their dreams don’t pan out, so they settle. But if you’re passionate about something, don’t stop,” Smith said.

The project has gained recognition, and he’s performed nearly 100 shows in the past few years throughout Ohio, Pennsylvania and as far as Myrtle Beach, S.C.

Although he looks up to the big names in rap, Smith said fame and fortune are not his goals.

“If that happens, cool, but it’s not about that. I want to find a way to live comfortably while doing music,” he said.

Smith is working on the release of his latest mix tape, “Down to Earth.” He said a music video will accompany the single “Without You,” a song about a past relationship.

He is also rehearsing to open at Rockapalooza, a music festival headlined this year by Machine Gun Kelly.

“I’m here once, and I have a shot at it,” Smith said about his music career. “Why waste it?”