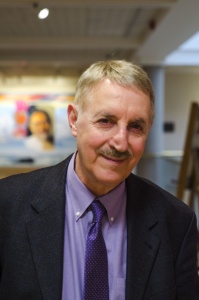 “The lectures themselves will last 50 minutes to an hour,” Zona said. “I will take significant works of art and share my thoughts about them like the Mona Lisa or works done by Andy Warhol.”

“I’ve seen the Mona Lisa as well as some pieces I am discussing in real time,” Zona said. “The Last Supper, Sistine Chapel, you name it. The only one I haven’t had the chance to see in the flesh is the Night Watch by Rembrandt.”

“We’ve held many wonderful exhibitions and lectures,” Zona said. “But with the exhibits this year we’ve set attendance records. The only factor against us seems to be the construction happening on Wick Avenue. Once that’s finished, I believe more people will make their way to us.”

According to Zona, attendance for these lectures usually reaches around 75 people. The auditorium was built to hold a maximum of 130.

“Art to a lot of people is truly mysterious,” Zona said. “They attend lectures such as these to find revelation and want to come forward and think. A work of art speaks to people on an individual basis, but ultimately is between the artist and the viewer.”

Among Zona’s favorites is the Night Watch by Rembrandt, the Mona Lisa by Leonardo da Vinci, and the Last Judgment by Michelangelo.

“I feel that the Night Watch is the most important in history,” Zona said. “It’s quite mysterious; very dark and complex and for some reason, I’ve always been drawn to it.”

This, of course, is not Zona’s first time giving a lecture at the Butler Institute. He began teaching at Youngstown State University in 1970 and was honored with the Heritage Award last year.

“It truly meant a lot me to receive the award,” Zona said. “I love teaching as an Emeritus professor, which means that I maintain teaching even though I’m retired. I just enjoyed the 9-5 so much that I didn’t want to leave.”

Zona’s job as Executive Director includes working with the artists directly as well as selecting exhibitions and making determinations as to what the museum will feature.

“It has been a real treasure here at the Butler Institute and an honor to serve it for this many years,” said Zona.

For more information about these lectures, people can visit the Butler Institute’s Facebook page.