Originally, St. Patrick’s Day was meant to be a feast for the patron saint of Ireland in the fifth century, but it has since evolved into parades, parties, shamrocks, drinks and anything to do with the color green. 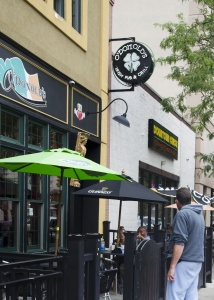 Sharing in the festivities is The Federal as it partners with the V2 Wine Bar to hold Shamrock on the Block 2017. The Downtown Youngstown Partnership, Great Lakes Brewing Company and Youngstown CityScape will sponsor the event.

“This is our fourth time having an outside heated tent event,” said Sophia Martini, manager of The Federal. “This is however, our first time partnering with V2 Wine Bar to organize it.”

The Federal itself will open at 8 a.m. for Pints and Pancakes and green beer while eating contests will be held outside as well as live entertainment.

“One of the things we’ll be doing is having a 50/50 raffle,” said Martini. “All of the proceeds we make will benefit the Downtown Youngstown Partnership as well as Youngstown CityScape. We’ll also have food vendors, a fully stocked bar, Irish bagpipers and Irish food all day.”

The Downtown Youngstown Partnership is an association of businesses who work together to address concerns and improve the overall environment, as well as a component of Youngstown CityScape.

Ellie Platt, representative of Nationwide Insurance Group and DYP Committee Chair, states The Federal will be offering a 10 percent discount on food purchases for attendees who present a Youngstown CityScape card.

“This is a great example of downtown businesses working together,” said Platt. “We will have our volunteers help the Federal and V2 in any way they can whether it’s selling tickets, serving food or anywhere else they may need us. It’s a great event for the Downtown Youngstown Partnership, and I hope it continues.”

Shamrock on the Block will have bands playing such as The Labra Brothers, The Patti ‘O’ Band and Whiskey Pilot, all leading up to the performance of Hoss and the Juggernauts.

Also partaking in the celebration of St. Patrick’s Day will be O’Donold’s located on Federal Street.

“We will be having live music inside all day starting at 8 a.m.,” said Christian Rinehart, owner of O’Donold’s Irish Pub and Grill. “We’ll be featuring the band County Mayo as well as Dolan Family Band, and we’ll be open at 5:30 a.m. for Irish breakfast.”

For breakfast, O’Donold’s will be serving corned beef, hash and green eggs with toast. For the rest of the day, Irish food will be served such as shepherd’s pies, corned beef, cabbage Irish egg rolls, rueben sandwiches, giant pretzels, burgers, wings and chicken tenders.

Christopher’s Downtown will have live music playing from 6 p.m. until 10 p.m. and will have Irish food specials all day, as well as drink specials.

“We’ll have specials on things such as Guinness extra stout,” said Ashley Koehler, a waitress at Christopher’s. “We’ll also be having $4 Jameson shots and Conway’s Irish Ale for $3, and serving rueben Sandwiches and corned beef.”

Another establishment, Suzie’s Dogs and Drafts, will have Josh Powell playing from 6 p.m. until 10 p.m. and will be open normal hours, closing at 4 a.m.

The Downtown Draft House will be having specials on draft beer and shots, such as Guinness, Irish Car Bombs and Irish whiskey, more specifically Telemundo.