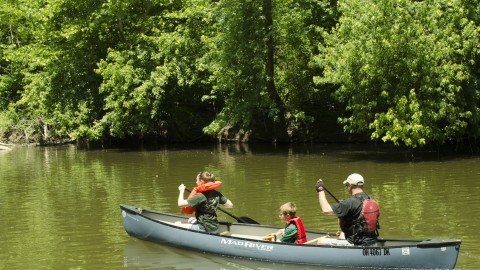 Artists, kayakers, burger connoisseurs and facial hair prodigies will descend on downtown Youngstown this weekend to participate in a pair of summer celebrations.

Coming back for it’s fourth year, the Friends of the Mahoning River organization’s Riverfest event will once again feature live music, local artwork and a variety of vendors and organizations connected with regional environmental endeavors.

Thomas Smith, coordinator of the Riverfest, sees the event as an opportunity for both entertainment and civic engagement.

“We have various community groups come out and various nonprofit groups, which we hope will help spark community involvement. We have educational displays, and we obviously try to encourage people to join our group. We also have kayak and canoe rides, regional artists, food vendors, a 22-foot inflatable slide and bounce-around for kids and a candy hunt on the river trail. So there’s really something for everyone,” Smith said.

The Tullsen Brothers and The Pick Ups will be on hand to provide live music for the event.

“There has been a definite increase in boater traffic — both kayak and small fishing boats — on the river. If you want proof of that try to find a used kayak in this area — you’ll pay a good price,” Smith said. “We have a definite uptick in recreational visitors to the river and it keeps growing every year. We’re definitely making headway in doing the Riverfest — people are paying attention to the river and they’re paying attention to us.”

Burgers, Beards and Brews is a new event for downtown Youngstown. The two-day event features a variety of local and regional musical acts, a gourmet burger cook-off and a fifteen-category beard and moustache competition.

Jason Tibolla of Third Arm Promotions, and one of the event’s coordinators, helped facilitate the collaboration that will make the event possible.

“This is the first year it’s gone on like this. There was a burger festival last year tied in to the [River Rock Amphitheatre] so this is the first year it has come to Youngstown. It was three separate events we married together for the weekend,” Tibolla said. “We have 10 burger entries, live entertainment Friday and Saturday with headliner Pat Dailey as well as the Fat and Furious Rolling Thunder car show from 12-4. Then Rust Belt Whiskers Society’s beard and mustache competition at the end of the night.”

The bands performing at the event are Ryan Ross and the Y-Town Syndicate, Hoss and the Juggernauts, Northern Whale, The Pickups, Two Days Until Tomorrow, The Cardboard Cutouts, Color Blind, Chookie Alberini and “The Legend of the Lake” Pat Dailey.

Anthony Fontes, founder of the Rust Belt Whisker Society and self-proclaimed “Competitive Bearder Extraordinaire” will host the beard and moustache competition. A World Beard Champion, Fontes hopes to use his enthusiasm for facial hair both to have a good time and help a local organization.

“This is our second year for our competition. I founded a beard and moustache club here in 2013 when I moved back here from California,” Fontes said. “So I started my own beard club after having competed for a few years. I’m a world champion beard grower and I wanted to do an event where we could give back to a local charity. I wanted to have a big competition so I talked to Suzie’s [Dogs and Drafts] and our first year we raised $700 dollars for Summit Academy.”

This year’s competition will benefit the Purple Cat.

While a beard and moustache competition seems as though it would inherently cater to only a small portion of the population, both Fontes and Tibolla have promised an outlet for anyone — regardless of age, gender or prevalence of facial hair — interested in competing.

“We have 15 categories for people to compete in and anyone can compete whether you’ve got stubble or a big ten inch beard. Everyone can compete, and there’s even a creative category for people who can’t or don’t want to grow facial hair to compete. If you can throw something on your face and make it look like a beard and mustache you can compete,” Fontes said.

While the primary collaborators are local businesses and organizations — Suzie’s Dogs and Drafts, Wholesale Fireworks and the Rust Belt Whisker Society — the city of Youngstown offered up their support for the event as well.

“Honestly [the event] stems from some conversations with [city events coordinator] Mike McGiffin who looked at some of the smaller events and said “what can we do to combine these and make it better?” so we married the events and created this,” Tibolla said.

Fontes believes that the city may see the event as a new downtown summer staple.

“We got support from the city and it seems like this is the event they’re looking at as their summer kick off event and it looks like they’re going to back us next year to do the same. I’m excited about it,” Fontes said.

Tibolla echoed Fontes’ sentiments and emphasized that while the event will include beards and beer there will be plenty of entertainment available for families as well.

“It’s definitely aimed at the whole family. We have carnival games, we even have one of the beard contests for children with a beard,” Tibolla said. “It really is all ages. The little kids will get as much enjoyment out of it as the big kids, especially anyone who enjoys burgers.”