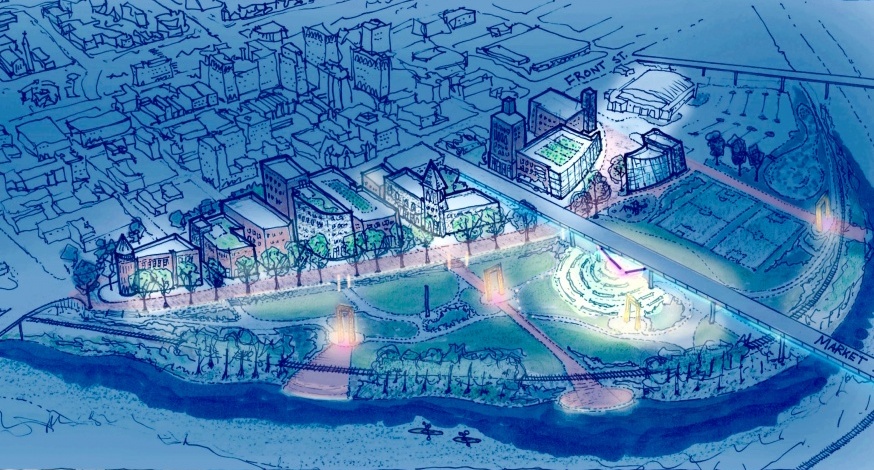 Citizens of Youngstown could see big changes if ideas — such as a slide down Hazel Street to draw students downtown — presented by the Cleveland Urban Design Collaborative last Thursday were implemented.

The students arrived in Youngstown at 2 p.m. on Thursday and presented their ideas at 2 p.m. on Saturday. A few students returned last Thursday to present their final vision plan at Fellows Riverside Gardens.

They took a brief tour and met with stakeholders before getting to work on design ideas. The initial focus was on using Phelps and Hazel Streets to connect Youngstown State University to the downtown area, but they branched out along the riverfront.

The students proposed turning Phelps Street into the main pedestrian pathway, running a bus circuit up Hazel Street to the University and back down Wick and Market Avenues to Front Street and creating 3-D printed street furniture.

An increase in green space was emphasized as a way to repurpose the sea of parking lots that acts as a barrier between downtown and the University, with a proposed strategy that would begin with formally designed elements near the University that become more natural as you get closer to the riverfront.

“The network of [proposed] green spaces through the downtown really capitalizes on how much surface parking there is, and so much of it is unnecessary, so we’re consolidating some of those parking lots and really making what’s there more of an asset,” Zeiber said.

Students also proposed increased development along Front Street to connect the city to the riverfront, with a boardwalk running alongside the north end of the former Wean United property. They also suggested using soccer fields, community gardens and educational elements to fill the 33-acre site.

They viewed the area underneath the Market Street Bridge as an underutilized asset, suggesting it as a potential site for a proposed outdoor amphitheater.

Zeiber said Youngstown is unique in that a lot of groundwork has already been laid for future development.

“A lot of times we come into communities, and they don’t know what they want yet. They know that what’s there isn’t really working, but they don’t know exactly what they want and they definitely don’t know how to get there,” Zeiber said. “That’s a real change from working here where it’s, ‘We know what we want. We know exactly how we’re going to get there. We just need to know exactly what it’s going to look like.’ So, we want to make sure that we gave them those tools and we really advanced the work that they’ve already done.”

Zeiber said doubling down on that space was a huge idea.

“I think they really proved that it could work really well for a lot of very small scale and large scale things,” Zeiber said.

A team focused on riverfront connections proposed turning an abandoned rail trestle running across the river behind B&O station into a pedestrian park they called the Y-line — an homage to New York City’s High Line.

“In any one of these charrette exercises, there’s one or two brilliant ideas. The Y-line is one of those ideas,” Morrison said.

“We don’t have to just hide this plan behind closed doors and then present it and then we’re all burned out because it took so long for us to come up with all those drawings. That was only 48 hours,” Marchionda said.

Marchionda was also impressed by a proposed trail to connect some underused parks on the city’s east side.

“Everyone talks about the East Side not having quality of life or amenities. Well, here’s something. You can get professional paintball tournaments, ATV courses, mountain biking,” Marchionda said. “Let’s just get people aware of it and let them travel around it safely.”

Katelyn Milius, a graduate student at Kent State University, said it was kind of a whirlwind.

“Just being able to quickly design and push out drawings and go through ideas really quickly and spit out a great product — it was a great experience to do that in a new place,” Milius said.

She said they toured some abandoned industrial sites and the mystery of those areas is captivating.

“There’s so many beautiful spaces along the river and the high line. There’s just a lot of potential here, so it’s exciting,” Milius said.

Tyler Middendorf, another Kent State University graduate student, said they were surprised by the existing assets in the city.

“Youngstown is really beautiful as it is now,” Middendorf said. “You come to these things and you’re kind of prepared for the worst, but there’s a lot of great assets.”