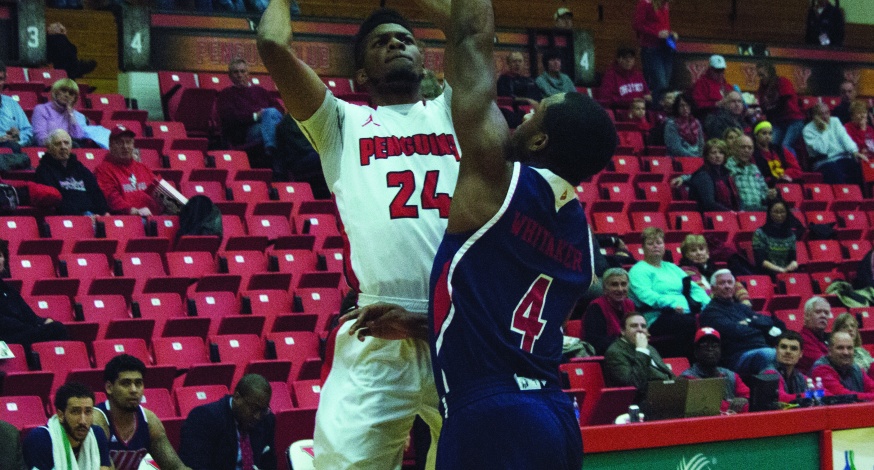 With 9.5 seconds left in the second overtime period, the Youngstown State University men’s basketball team was down 91-90 to the University of Illinois at Chicago. YSU guard Francisco Santiago inbounded the ball to Cameron Morse, YSU’s best player, who pulled up for an eight-foot jumper from the right baseline but it was short.

YSU forward Matt Donlan ran down the middle of the lane and tipped the ball over two UIC defenders players sitting in front of the basket. Donlan’s putback gave the Penguins a 92-91 lead with 1.2 seconds remaining.

The Penguins came away with the one-point win over the Flames, snapping YSU’s four-game losing streak and won the final game of the home stand.

While addressing the media on Monday, Donlan said the Penguins “shot ourselves in the foot” during the team’s 64-59 loss to Cleveland State University on Saturday night. He went on to say YSU

couldn’t overlook the Flames after nearly blowing a 20-point lead in the first game against UIC.

“Losing sucks. It just comes down to that, and I think we just got tired of losing. I think we just went out there aggressive. This is a team that’s been hot, winning three of the last four,” Donlan said

in the postgame press conference.

All five YSU starters scored in double digits. Morse led the team with 28 points, Santiago scored 23 and Donlan was third with 13 points. YSU center Jorden Kaufman had his second double-double of the season — 11 points and a career-high 18 rebounds.

YSU head coach Jerry Slocum said the team played a complete game on Tuesday. The starting five were critical to the team’s play in the overtime periods.

“To see the young guys come through like that … Matt Donlan had one offensive rebound, it was a big one,” Slocum said. “I’m just proud of Jorden Kaufman. That’s what happens when you can stay on the floor. He had 18 rebounds; he’s impressive there. It was good to have Sid [Sidney Umude]. He had a solid 18 minutes, he’s obviously our best low-post scorer — gave us an option there. It was a good win by the Penguins.”

One of the turning points of the game came late in the fourth quarter when Santiago started to defend UIC freshman Dikembe Dixson. Santiago held Dixson to nine points on 3-11 shots from the end of the fourth quarter and both overtime periods. Dixson scored a career-high 40 points to go along with 17 rebounds.

Slocum said Tuesday’s game was a step in the right direction for a team that has struggled on defense and a providing consistent effort during the season.

“I think you say a group of kids that are fighting and want to get better and haven’t packed anything in,” Slocum said. “You look at those guys tonight — they fought, they did a great job and I’m really, really proud of them.”