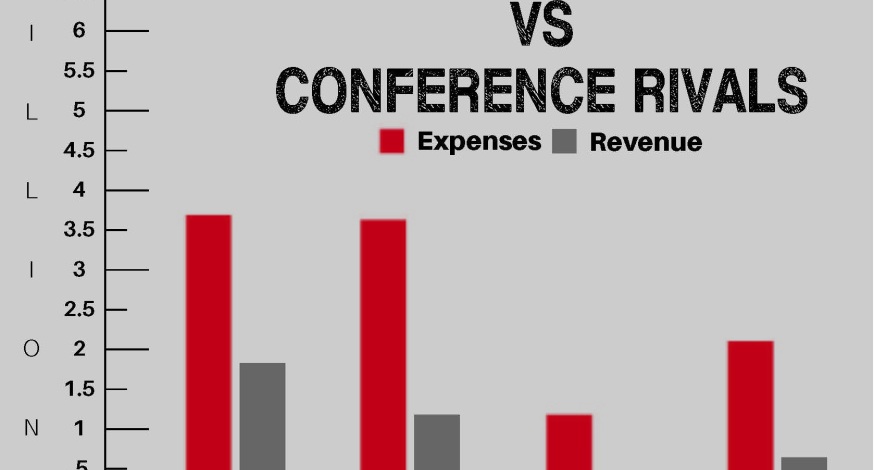 For many college campuses across the country, the athletic department’s expenditures have been a topic of discussion for years. This is no different at Youngstown State University.

YSU takes over $10 million from the general budget to fund the athletics department every year. Meanwhile, the faculty fights for salary increases and buildings needing repairs.

With growing frustration towards the increasing need to fund collegiate athletics, attention has turned to how much funding goes to academics and facilities — a point of contention in last year’s faculty contract negotiations.

Chet Cooper, academic liaison officer between faculty and the NCAA for student-athletes at YSU, understands the faculty’s frustrations.

“They’re frustrated. They’re seeing money being spent in different areas, and athletics happens to be a target because [the faculty] see the athletic budget growing,” he said. “But they don’t see the hows and the whys and the wheres of the [athletic] budget.”

Cooper said there are other, bigger financial problems the university is creating for itself like hiring new administrators for jobs that have never existed before.

“You can understand where [the faculty members] are coming from. They have every right to be frustrated,” Cooper said.

Cooper cautions people about attacking athletics before they fully understand the amount of money generated by student-athletes attending YSU.

YSU Athletic Director Ron Strollo presents the Intercollegiate Athletics Fiscal Year Report to the YSU Board of Trustees every year — a document compiled by Strollo and assistant athletic directors.

The report exceeds standards set by the Equity of Athletics Disclosure Act and the NCAA, but Strollo said it was important to incorporate every possible financial factor to give the most realistic picture of the athletics department.

The numbers show that YSU generates more money from athletics than its rival institutions in the Missouri Valley Conference and the Horizon League with less initial investment. The numbers also show that a significant portion of the money given from YSU to athletics goes directly to scholarship costs.

The YSU football team made changes in the past few years to help save money. These include reducing staff salaries by 5 percent, not requiring all athletes to live in the dorms during pre-season training and leaving for away games later to avoid excessive hotel and food costs.

Both Cooper and Strollo agree that one of the biggest public misunderstandings in regards to the athletics budget is the assumption that most, if not all, student-athletes are on full athletic scholarships.

About $4 million of the original $10 million from the university’s general fund is used for scholarships.

“That money is essentially circular,” Cooper says. “It’s in and it’s out.”

According to Cooper, the cost of running the university is the same regardless of whether student-athletes are in the classroom or not. Since student-athletes are fairly scattered throughout all of the colleges and programs, it would be difficult for YSU to save on tuition costs caused by athletes’ presence in classrooms.

With that reasoning, Strollo subtracted the $4 million cost of scholarships from the total $10.17 million cost of running the athletics department, leaving his report with a total of $6.12 million in actual costs to YSU.

In total, Strollo found that YSU earned $3.18 million from tuition, room and board and other schooling fees from the 316 athletes with partial or no scholarship. This is the reported revenue brought to the university by the athletics department.

The revenue that is actually earned and kept by the athletic department is $2.7 million, as reported in the Equity in Athletics Disclosure Act. In addition, $3.32 million comes from contributions from the NCAA and the state of Ohio for student completion and success. In the 2013-14 fiscal year, YSU athletics made $6.5 million on its own.

Between the NCAA contributions and team revenues of $6.5 million, YSU is left with a profit of $378,137 from athletics, according to Strollo.

“The MAC institutions expend approximately twice as much as we do while providing the same services to roughly the same number of athletic programs and student-athletes,” Strollo says. “We’re doing more with less.”

The university earns money, indirectly, just by having athletics on campus. Selling athletic-related apparel at the bookstore, game-day parking fees and campus dining all benefit by having more fans on campus for events as well as by having student-athletes living and eating on campus.

Another intangible benefit not reflected in the budget is the diversity brought by student-athletes. Besides just bringing in more men and women from across the country, 28 percent of the international students enrolled at YSU this year are athletes.

Part of the athletics budget goes directly to ensuring Title IX compliance, which must be maintained for the entire university — not just athletics.

“If we aren’t compliant with Title IX, it’s going to be worse for the institution … athletics provides diversity. They provide equality to a certain extent between males and females, and all of that combines to a better institution,” Cooper said.

Besides encouraging diversity, athletics provides better students for YSU. Over the past five years, student-athletes have achieved almost twice the graduation rate of the average YSU student population.

“On average, student athletes perform better academically,” Cooper said. “Since they perform better academically, they have higher graduation rates . . . so that generates money. Retention is better for student-athletes than the general population.”
While the athletic department budget is sizable, according to the information Strollo presented, the benefits outweigh the costs.