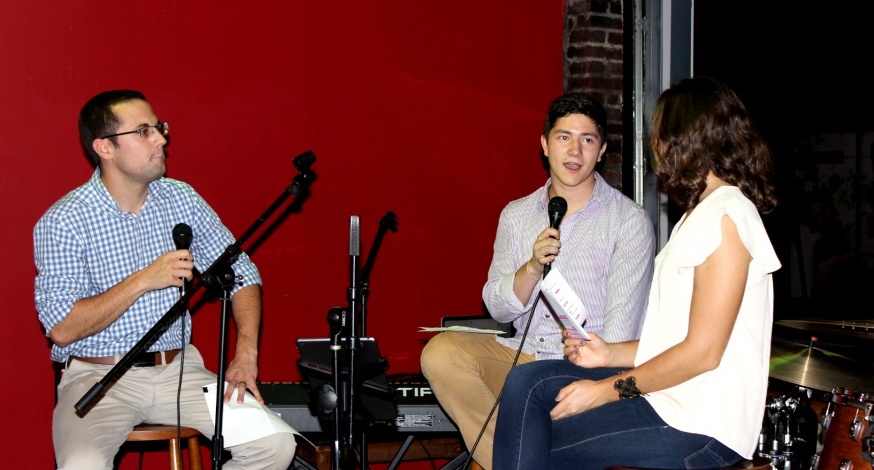 Around 40 people showed up to Suzie’s Dogs & Drafts Thursday night to take part in the student organized event Rock the Vote. Rock the Vote featured live music and guest speakers Perry Alexandrides, district representative of the Ohio Secretary of State’s Office and Michele Simonelli, the president of the League of Women Voters of Greater Youngstown.

SGA President Tyler Miller-Gordon said Smith was the driving force behind getting the guest speakers and organizing the event.

“Jillian did a lot of great work, she really pulled (this event) together.” Miller-Gordon said. “She’s a workhorse, she reached out to Simonelli and Alexandrides to get them here.”

Greta Frost, co-president of Pi Sigma Alpha, believed that having Alexandrides there was crucial for their goal of educating young voters about local issues.

“Some of the questions that may have come up, with voting and voter registration, a lot of the students in Pi Sigma Alpha have the answers because we are political science students but we don’t have all the answers, so we wanted to make sure that we had somebody there who would have all of the answers,” Frost said.

Simonelli spoke about local politics and provided non-partisan information regarding voting. She believes it is important to educate young voters.

“Right now millennials make up the largest portion of the electorate, so I think it’s important (for them) to start voting because once they start voting young they keep voting.” Simonelli said. “If you get them into vote early and make them understand how important it is, we’ll have lifelong voters.”

Miller-Gordon said her presence at the event was essential for young voters looking for more information.

“It was very important that she was there because they are an organization that provides non-partisan information and that’s extremely important to help young voters make up their minds” Miller-Gordon said.

In addition to providing information about the upcoming presidential election, Simonelli stressed the importance of local politics. Frost agreed that taking the time to educate young voters about local politics was important.

“National politics are great and a lot of those issues do affect us, but a lot of the local races affect things like infrastructures, jobs, and education,” Frost said. “Local politics may not have as many flashy topics but they are important topics nonetheless.”

“It’s absolutely vital for young people to be involved in local politics.” Edwards said. Change doesn’t start from the top down, change functions from the bottom up. If you don’t have change in policy at the local level, then you are not going to get changes in the state level or moving up to the federal level.”

Aside from live bands and guest speakers, there were some information tables set up in the bar that provided pamphlets and flyers.  Nick Cocca, Ohio field director for Turning Point USA, Nick Cocca, manned one table.  Cocca believes that events like this are very beneficial for college-age voters.

“I think that there are a lot of very passionate college students who have strong political opinion- they’re the future.” Cocca said. “College age voters make up about 25% of the voter demographic.  Young people are going to be making the decisions in the next 60 years’ worth of elections. The college-aged voter is a big demographic and it’s a very influential demographic.”