While it’s too early to say for certain, fans at the Beeghly Center could be watching a star in the making.

I’ll just say it. Darius Quisenberry is one of the most talented basketball player to attend Youngstown State University in some time and, by the end of his time here, will possibly bring the school closer to the NBA than it’s been since 1984.

Six players have been drafted out of YSU, but none of them saw the court.

The last and only player from YSU to play in the NBA was Leo Mogus. Mogus attended the university from 1939 to 1943 and played in the NBA’s precursor league, the Basketball Association of America, until the NBA was established for the 1949-50 season.

Many talented players have since stepped on the court at the Beeghly Center over the years, but few have made an impact bigger and quicker than the point guard from Springfield, Ohio.

Two games for the Penguins this season alone have shown why Quisenberry has a good shot at making the big time.

A good way to evaluate talent at any level is to see how the player performs against top-level talent.

YSU’s schedule has done just that by giving Quisenberry the chance to showcase his skills against West Virginia University and the University of Louisville, two of basketball’s blue-blooded programs.

Quisenberry shined in the spotlight in those two games. With the final seconds ticking away, he hit a buzzer-beating 3-pointer against the Cardinals.

Against the Mountaineers, Quisenberry was one point shy of tying his season-high 23 points while shooting 50% from the field.

His play in those games left an impression on the opposing coaches, who both singled him out in their postgame press conferences.

It’s not like playing for a mid-major is some career death sentence.

Ja Morant of the Memphis Grizzlies has been the NBA’s Rookie of the Year thus far, and he’s one season removed from Murray State University.

In his two seasons with the Murray State Racers, Morant averaged 18.7 points per game. Quisenberry is averaging 14.3 points per game, but expect that number to rise as this season goes on.

I don’t want it to seem like I’m saying Quisenberry is the next Morant or is even a lock for the NBA because that’s a lot to ask out of any player. But in the age of social media, it’s easier than ever to get noticed at a smaller school.

Eyes will still gravitate toward the big schools. But players like Morant and CJ McCollum, who attended Lehigh University, prove that you don’t have to attend a basketball powerhouse to make it to the next level.

Though he’s only a sophomore, Quisenberry has opened plenty of eyes across the nation, and if he maintains his current pace, he will open plenty more by the time he graduates.

If the NBA isn’t what lies in the future for Quisenberry, professional basketball certainly is.

Kendrick Perry, a 2014 graduate, had a similar trajectory to Quisenberry and is currently playing professional basketball in Australia, one of the top international leagues.

It’s an uphill battle getting noticed at a smaller program like YSU, but Quisenberry has always welcomed the adversity.

“I love being the underdog going into games. That’s always fun because you really don’t have anything to lose,” Quisenberry said after the West Virginia game. “They have everything to lose.” 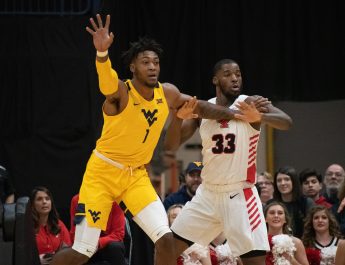 Men’s Hoops Off to a Hot Start in Conference Play 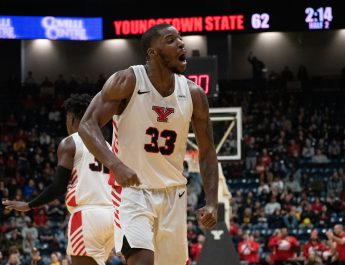 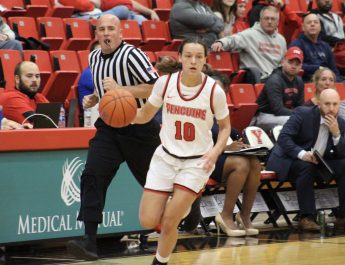