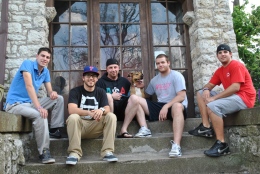 When Travis Stauffer was 18 years old, he started his six-year, four-month, 23-day mission in the military. Now, at age 31, Stauffer is ending his two-and-a-half-year mission in another structured environment — the Alpha Phi Delta fraternity house.

“I pledged Alpha Phi Delta fraternity when I was 29. I am the oldest member of our chapter,” Stauffer said. “I thought it was kind of comical to have younger guys that are 18 to 22 years old telling me what to do when I’m 29 and had already been in the military.”

The veteran started in the military as an undesignated deckhand, which he said is essentially the “bottom of the barrel.” He then went on to work in electric warfare, then as a cryptologist and finally as a wrestler for the Navy.

When Stauffer was released from the military in November 2005, he returned to Ohio for a short three months. He then drove a 23-foot RV to San Diego, lived out of the van and attended San Diego Community College.

When his unemployment pay was nearing its end, Stauffer reunited with a friendly face from the military that got him a job at a nightclub in San Diego.

“Things started going pretty well. I was getting paid pretty well, and I moved to a three-bedroom house three blocks from the beach,” he said. “I worked at the club and was continuing my general studies at San Diego Community College.”

In 2007, Stauffer was accepted to California Maritime Academy, a school he had been applying to for two years. He said he sold everything he owned to attend the school.

While in the Northern Arabian Gulf, Stauffer said he worked as an electronic warfare operator dealing with electronic signals associated with missile platforms, which caused a tremendous amount of stress.

He said he also acquired back problems from wrestling.

When he arrived at the university, he was told he was not able to attend school there because of the pain and stress medications he was on.

“Since then, I’ve been doing well, and I haven’t been on my prescribed meds,” he said. “I deal with the pain that I have and the issues that I have through exercise and healthier ways of dealing with my anxiety.”

Stauffer has since reapplied and has been accepted to the academy. He said he plans to attend in August.

Because of spending so much time in the military, Stauffer said he was never able to experience the life of a college student. That is why, when he started school at Youngstown State University, he joined a fraternity.

“I would hear stories, but when I was 18 to 22, I wasn’t having such a great time. I was having a pretty rough time,” he said. “I never got the opportunity to live the college life, and being in a fraternity is the epitome of college life.”

Stauffer said he has made a connection with his brothers, despite their age difference.

Alex Neville, 23, formed a special bond with Stauffer through his aspirations to join the military after college.

“He’s one of the closer fraternity brothers I have. I commend him for coming back to school, but it also helps that you have help from the naval experience,” Neville said. “I think that since he is kind of a child at heart, and he has a very good sense of humor, I think that helps out with him joining.”

Stauffer’s father, Ron, joked and said that if they can put up with him in the fraternity house, the more power to them.

“We’re really proud of Travis because he’s an older student living in a frat house, but he spent six and a half years in the military right out of high school,” he said. “It was a good choice for him because I don’t think he would have been ready for college at the time.”

Stauffer said his ultimate goal is to be a harbormaster, and possibly use his engineering background to work on boats as well.

“I wasn’t very happy with my quality of life when I was in the Navy. When I was younger, I didn’t take too much pride in what I did because I didn’t enjoy what I did,” Stauffer said. “But I feel like, if I’m going to do something for a living, I want to be able to be happy going to work every day.”