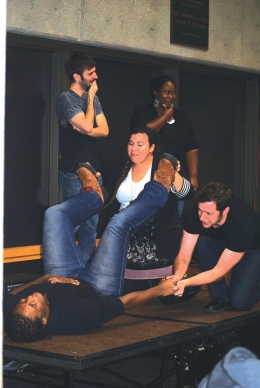 Joshua Green, Joe Pascarella, Marisa Zamary, Nikita Jones and Cheney Morgan of the I.C.U. Improv group perform in Cushwa Hall on Monday. During an improv skit where one of them would say “freeze” and another would start a scene based on that pose, Green acts as if he is giving birth to an alien baby. Cushwa echoed with laughter as a result. Photo by Marissa McIntyre/The Jambar.

On Monday, students studying in Cushwa Hall’s atrium were able to take a break for an hour and watch the I.C.U. Improv group perform.

The Youngstown State University student organization performed as part of the Bitonte College of Health and Human Services’ Diversity Week.

Tammy King, associate dean of the college, said she wanted a way to bring awareness to diversity while also allowing students to have fun.

King said an educational speaker is planned for the spring, while this semester is about exposing the talents of those on campus and in the city.

“Our college has a diverse community, and we want to celebrate diversity,” King said.

She said she wants to bring attention to racism, grief and death, as well as how different cultures deal with these issues.

Throughout the week, two singers will perform, as well as a martial artist.

King said the idea behind the different acts is to introduce people to different cultural perspectives.

“We wanted to address diversity not only for students, but faculty as well to come down, have some fun and maybe learn as well,” King said.

Members of the I.C.U. Improv group said they were honored to perform for the first Diversity Week event.

Joe Pascarella, a junior theater major at YSU, said when the group’s members were contacted to perform, they jumped at the chance.

“Go, diversity!” Pascarella said as the group exited the stage following the performance.

Group members performed a skit using the alphabet to start the next sentence of a conversation and made a story of it.

Nikita Jones, a junior theater major at YSU, said she was excited to perform for Diversity Week.

“If you go to YSU, diversity is important,” she said. “There are so many different ethnicities and races, so why not branch out?”

Jones said the event allowed members of the group to reach out to the YSU community. Joshua Green, a senior musical theater major, said performing during the event was a learning experience.

“It felt a little weird. I didn’t think they were paying attention at first, but then more and more students were participating,” Green said.

Travis Sutak was studying when the group began to perform. He said he was annoyed at first because the stage took up so much room in the lounge, but he quickly started to have fun.

“It’s exciting to have something to watch in the middle of the day when you weren’t expecting it,” Sutak said.

Sutak said he enjoyed the performance for Diversity Week.

“It’s very important to actually realize how diverse and how many different races and ethnicities we have on campus and how everyone reacts to each other,” he said.

King said she hopes the rest of Diversity Week is as successful as the first day.