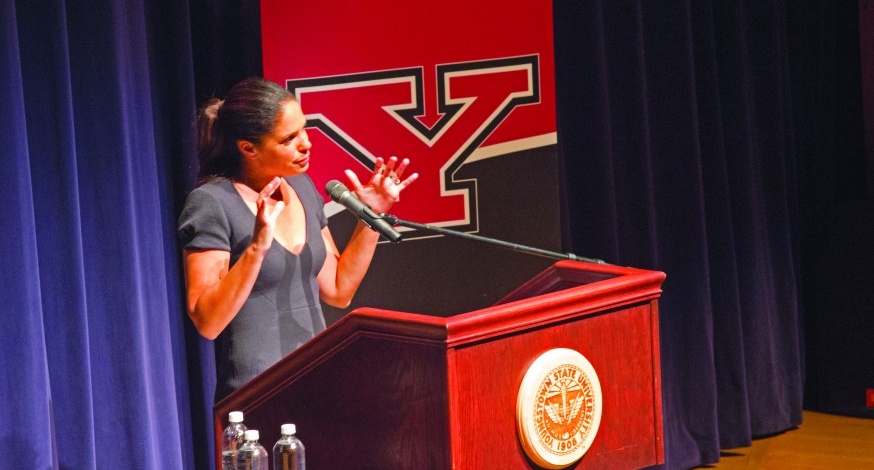 O’Brien spoke about growing up as the daughter of an Afro-Cuban mother and white father, and how this shaped her perspective as a journalist dedicated to telling stories of individuals who are often ignored.

She said that for every 100 stories about white people, there are five stories about black people, usually about sports or crime, three stories about Hispanics, all revolving around illegal immigration, one story about how Asian Americans are wonderful students and no stories about Native Americans.

She said she got in fights with producers doing the Black in America series because we have a tendency to dehumanize impoverished people in the media.

“We just do this broad brush, ‘She was born in the ghetto. Her mom’s a crack addict,’” O’Brien said. “We don’t allow them to be a human being.”

In a press conference preceding the event, O’Brien discussed the current tensions between people of color and the police in places like Ferguson, Baltimore and New York.

“I think that the conversation that was very clear and understood in black communities has now bubbled to the surface,” O’Brien said.

She said when she did her first Black in America documentary for CNN, they told the story of how black families — regardless of socioeconomic status — sat down with their sons when they turned 13 and had a conversation about them with the police. Her boss said, “Everybody has this conversation with their kids.” And she had to explain that white people tell their children not to be mouthy and black people tell their children how to behave so they come out on the other side of the interaction alive.

“I think what we saw in the last year, especially around stop and frisk, was that people outside the black community began to recognize this phenomenon,” O’Brien said. “That actually there is this big differential in how people are policed in this country and that certain areas of injustice were just becoming too frequent and too obvious to ignore.”

She said the arrest of James Blake in New York was a classic example.

“It was not reported as an erroneous arrest until he said something. He made it public, otherwise it would have flown under the radar,” O’Brien said. “The man apologized and the commissioner apologized, but at the end of the day you could see from the video pretty clearly that they tackled a guy because he’s black, and that happens a lot.”

O’Brien said polling revealing that most Americans think race relations are bad right now is a good sign. She said historically when white and black Americans were polled on the state of black America, there was a huge gap between the opinions of the respective races.

“A gap like that concerns me more,” O’Brien said. “So, I feel like when everybody is uncomfortable we’re really recognizing that we have something that we need to fix.”

She recounted a recent story from the New York Times about a man from the Congo who was put on display in a cage with an orangutan at the Bronx Zoo in 1906. She said we haven’t had conversations about events like that — that there were a lot of people perfectly OK with putting a human being in a cave with an orangutan.

“We don’t teach it. We don’t discuss it. We don’t deconstruct it,” O’Brien said. “We never have really come to terms with it, and until we do that I think we are going to continue to really struggle.”

She said having these conversations is uncomfortable and awful.

O’Brien said part of that conversation is digging into history. She used the confederate flag debate as an example because as Americans we don’t study the meaning of the flag in our history classes. She said the other part is just listening to people to understand what drives them.

“You have to let people believe what they believe and say what they believe, and then you can talk about what you believe. But you can’t put everybody in their little boxes and roles and expect them to be comfortable with what’s inherently a really icky conversation,” O’Brien said.

She said she sees hope in a younger generation that is interested in talking about things that often went ignored.

“Do you know how many people were killed by the police in many of the ways that we’ve seen on videotape, and nobody cared? Do you know how many versions of James Blake — but not famous versions — have been beaten up and misidentified and no one ever wanted to talk about it?” O’Brien said. “So the fact that people are talking about it, I think, is a huge step forward.”