Emily Exists, a piercing and tattoo apprentice at DNA Studios, is making her mark in the body modification world. Nothing could be better for her than to be a part of the family-run shop as she progresses in the industry.

Exists began as a piercing apprentice in January and has been a tattoo apprentice for two weeks. She said sketchy tattoos she received as a kid introduced her to the industry.

“I met Joshua [Fellows], and he showed me what good tattoos look like,” She said.

Exists said meeting Fellows, a tattoo artist and piercer at DNA, gave her the opportunity to expand upon her love for art.

“It’s a family business here and that’s what we do,” She said. “It’s extremely rewarding, and it’s an art that, if you’re doing it right, you don’t want it to die.”

Exists said the relationship between the tattoo artist and the client is what brings the ink to life. She said she can tell when a tattoo was done by Fellows because his soul is in it and the tattoo has a life of its own.

She said they do not use flash tattoos, which are designs that are pre-made and displayed on the wall to give walk-in customers ideas, at the studio. 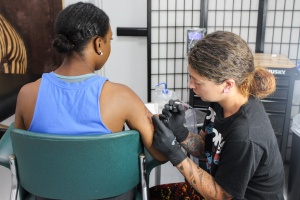 “You’re not going to see a nautical star hanging on our wall for someone to just say, ‘I want that one’ like everyone else has,” she said.

Exists said each tattoo done at DNA is unique to the artist. She said they all have their own style and if people pay attention to it closely, they will be able to see the difference.

Exists said her piercing and tattooing journey has been a blessing. She said she is doing what she loves every day, so no matter how busy it gets, at the end of the day she’s thankful.

“Mark and Joshua, I couldn’t imagine not having people in my life like that,” Exists said.

Fellows said he couldn’t be more proud of Exists.

“It’s awesome to see,” he said. “It’s inspiring and she’s pushing through it and taking it seriously.”

Fellows said Exists is taking pride in her work and that tattooing is a very spiritual art.

“Every move that you make is forever,” he said. “If you actually know Emily and what she has come from and been through, it’s inspiring to see it happen. She’s driven and it’s awesome to see all three of the chairs in the shop being utilized.”