When I initially heard that Youngstown State University had sponsored a bus to Washington D.C. for the Women’s March on Washington, I was excited about the opportunity. 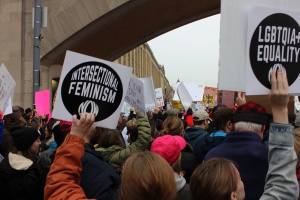 That was dashed instantly when I heard it was in about two days and possibly no spots were available. After a frantic email or two, I was able to take someone’s place on the waiting list, sealing my chance to be a part of history.

When I began thinking about what this movement stood for, though, I began to feel a sense of unease, as if I didn’t really have a place there — my seat maybe could’ve gone to a woman more suited for the opportunity.

That feeling lingered as I boarded the bus heading to D.C. It was filled with women of all ages, but was substantially lacking males. The only ones I spotted were myself and the bus drivers.

I had planned to drown myself in music for the nine-hour ride, but that changed when I began chatting with a fellow student, Sierra Braddy. We talked and shared stories of what brought us to this moment. Hers was the protection of Planned Parenthood.

We arrived in Rosslyn, Virginia, and I branched off with my group and began trying to catch a train to D.C. After about a half-hour later, we arrived at the Smithsonian Station, where hundreds of thousands of marchers occupied Independence Ave.

People carried signs with messages like “Grab My Hand”, “Not Locker Room Talk” and “Nasty Women.” Everyone was there for a different cause, but in the end, with the same agenda: supporting women’s rights.

Early reporting didn’t expect many people that looked like me, African American and male, to turn out to the march. Interestingly enough, I found it hard to feel out of place.

Glancing around the crowd, it was easy to spot people from all different backgrounds and walks of life.

There was an African American male marching with his college age daughter, a young boy with his mother wielding a “Hillary is better, Trump is poo” sign and duo of older women dressed as Ruth Bader Ginsburg navigating through a sea of millennials, just to name a few.

Coming from a family of people that sat in on marches during the civil rights movement, I thought it necessary to do the same. In doing so, I know I was doing it for friends and strangers who belong to marginalized groups in today’s society.

It felt right, like this is how democracy is supposed to work. I didn’t feel isolated, but instead empowered that I could be a part of history.

On the way back to Youngstown, I felt more a part of the movement than I previously did. I wasn’t the guy on the bus. I was a protester, just like everyone else — an activist, if you will.

Admittedly, I’m no fan of Trump, yet I’m willing to give him a chance. But with that chance comes accountability. He is the ruler of the free world and works for the American people, and he has to understand he is under a microscope of scrutiny at all times.

With a Republican-controlled House, Senate and GOP president, the right people are in place to seriously cut back on the progress the U.S. has made on women’s rights and other hot button issues.

If a time comes again that calls for a protest, I don’t mind being on the front lines, exercising my right to do so.