The crash of drums and the rhythmic hymn of a guitar filled the ambiance of downtown Youngstown on Friday at the Hits for Hearing benefit concert in Suzie’s Dogs & Drafts.

The event was held by the Youngstown State University Delta Zeta chapter to help raise money for their national philanthropy, the Starkey Hearing Foundation. The charity focuses on providing ear-care screenings, speech clinics and hearing aids to those suffering from hearing loss.

The sorority has set a national goal of $5 million over five years and is currently on track to complete it. 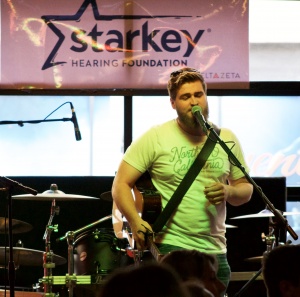 The night consisted of performances by The Labra Brothers, Northern Whale, These Guys Right Here and Nick Kerpsack, which attracted a large crowd to the venue.

The sorority reported that the event raised over $2500 through $8 entry tickets, 50/50 raffle tickets and event t-shirt sales.

“A sole part of Delta Zeta is giving graciously of what is ours. That’s part of our creed and how we are able to give back to Starkey Hearing Foundation,” Prologo said.

She said Delta Zeta’s philanthropy played a big part in her decision to join the sorority, as well as the concept of sisterhood and leadership opportunities.

“I think [Hits for Hearing] went really well. This is the first year that we did it and we’ve never planned a benefit concert before. We normally do a 5k on campus so this is pretty new for us,” Betras said. 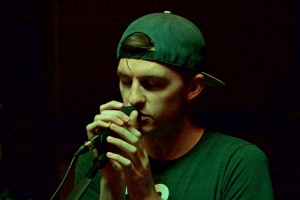 The YSU chapter has raised more than $15,000 over the past five years and Betras said the Starkey Hearing Foundation holds a special place in her heart.

“Hearing loss is such a big deal and people don’t really realize it, so I think it’s great to bring awareness to it,” Betras said.

Sorority members were not the only ones who attended the benefit concert. Student Government Association President Rayann Atway and Vice President Ernie Barkett were spotted attending the event in support of the charitable cause.

Atway said events like this show students’ passion about their causes and help bring people together in support of local organizations.