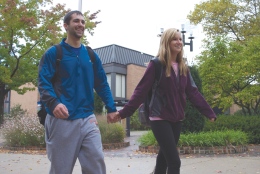 Ryan Brdek and Hope Hrabowy, juniors majoring in civil engineering, hold hands while walking through campus. The couple defy the trend, saying they began dating before being intimate. Photo by Chris Cotelesse/The Jambar.

From cave paintings to the big screen, experts say sex has taken center stage in entertainment and other media, challenging traditional standards of love and intimacy.

“Sexual Hookup Culture: A Review,” published in the June issue of the Review of General Psychology, examined contemporary relationship studies and views of casual sex.

“We see so few first dates among college students, but there is a large desire to have those intimate relationships,” he said.

Instead of getting to know someone over a cup of coffee, many young adults are likely to skip courting rituals and lead off with sex.

He also found the stereotype that men want sex more than women was greatly exaggerated.

The study showed that the sexual motive for men and women was the same: sexual gratification.

“This defies evolutionary behaviors and challenges these notions,” Garcia said.

Michael Clayton, an assistant professor of psychology at Youngstown State University, said many students struggle with the concept.

“Sometimes, our culture has a hard time seeing females being as active as males,” he said. “We seem to think of females as less forward and less assertive.”

He said this mindset seems to be ingrained in our culture, but research suggests it’s a myth.

Clayton said that, in contemporary culture, the number of men and women seeking degrees are equal, and women are quickly creeping into fields that were mainly dominated by men.

“Females at this age are more goal-driven, generally, than males,” he said. “Females are always a couple years more mature than males, and so females are actually not that different than males.”

The nature of women being more goal-driven, especially in school, also relates to their participation in hook-up culture. Clayton explained that many women may hook up to satisfy needs while not letting a relationship get in the way of their educational goals.

“Originally, when people learned about the hook-up culture, people were afraid for females: that men would take advantage of females in college,” he said. “Then, over five years, people found that females are active participants in this, and initiating this to get needs met they have without distracting them from their goals.”

Changing gender roles and attitudes toward sex are reflected in the media.

Garcia said movies like “No Strings Attached” and “Friends with Benefits,” which portray casual sex, both demonstrate and promote a proclivity toward the act.

Matthew Colon Diaz — a graduate student in sociology at the University at Buffalo — said these changes are amplified on college campuses.

“There is a notion that ‘everyone is doing it,’ which is primarily not the case when looking at the U.S. as a whole, where a surprisingly large amount of people will report abstinence well into their 20s,” Diaz said.

He said college students are almost expected to experiment.

“Sexual freedom is a part of the college experience within the life course,” Diaz said.

As young people spend more time away from parental supervision, they want to explore that freedom.

“In recent decades, young adults have become accustomed to enjoying their 20s and delaying marriage until personal goals of education and financial security are met,” Diaz said.

Tina Hamett, a junior at YSU, said her generation hooks up to fulfill physical needs without getting bogged down by commitment.

“I feel it takes a lot of work and well spent time that I could put towards work and school,” she said. “To me, a committed relationship is too much of a hassle in college.”

However, Diaz said that more sex doesn’t mean the end of intimate relationships.

“Even though casual encounters may be a common occurrence, people still report expecting to be married and have a family, just at a later age than in the past,” he said.