The costumes were in abundance and the tubas were booming Sunday night when the Dana School of Music presented their annual Octubafest. 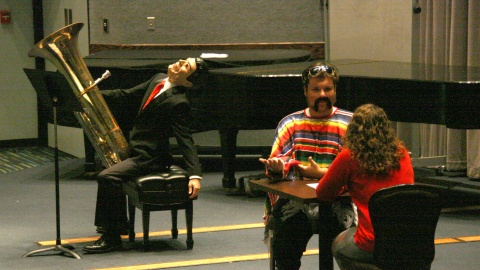 The event, which is run locally by Youngstown State University’s Brian Kiser, was created to spotlight an instrument that is not often recognized in the standard band setting.

Octubafest began in the 1970s when Harvey Phillips, a renowned tuba professor and advocate, wrote a series of solos to highlight the tuba. Along with the original scores of Octubafest, additions were drafted to tell the story of a sequence of blind dates through the bass notes of the tuba. Although Harvey passed away in 2010, his mentees like Kiser carry on his tradition of putting the tuba on the pedestal.

However, Kiser added his twist to the tale years after he began YSU’s Octubafest 12 years ago. YSU is the only school that celebrates Octubafest by adding in students to act the part of the blind-daters in the storyline.

“Phillips wrote it a few years ago, and I was part of a group that commissioned it,” Kiser said. “So we came up with the dates, and it was our spin to have the acting with it. I believe we’re the only school that does that.”

Following Phillips’s original spirit of glorifying the tuba, Kiser also feels that the tuba is an unsung hero of the band. For Kiser, continuing the tradition of Octubafest is his way of not only spotlighting his students, but also challenging them with more sophisticated music than they’re used to.

“You have to have the bass,” Kiser said. “Often in bands and orchestras, the [tuba] parts are very easy, so with these solos, it’s a chance to show off the talent that isn’t always heard.”

For student Alyssa Kordecki performing the solo acts in Octubafest is crucial to her because of the challenge it creates compared to common tuba ensemble scores.

“This solo music is far more difficult than anything we play in a bigger ensemble,” Kordecki said. “If you don’t give the tuba the spotlight every once in a while, they’re not going to learn to play in a soloist style. When tubas are only in ensembles, they’ll think their only ability is to play an accompaniment line.”

Fifth-year student Travis Beatty said that adding in the challenge of the Octubafest solos to the schedule is an endeavor that he gladly welcomes. 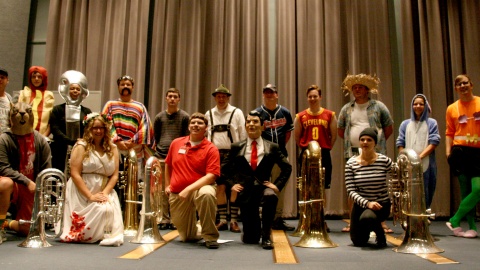 “The good thing about an academic setting like this is we get one on one time with Dr. Kiser, and we get to work on solo literature, which is much more challenging,” Beatty said. “It flushes out extended techniques and ranges, things that you wouldn’t hear from the back row in the band or orchestra and brings it front and center.”

As a fifth-year student, Beatty said that he had seen the amount of students in the tuba studio change over his years, and he’s excited about the fact that more people are taking an interest in the tuba/euphonium track. He said that Octubafest is a great, laid-back environment for underclassmen to get their feet wet with solo performing.

“This year, a lot of the studio is underclassmen, who don’t have a lot of experience with performing in front of a crowd on their own,” Beatty said. “So lightening up the mood like this definitely takes some of the pressure off their shoulders and allows them to go out and have fun. It’s a great way to decompress.”