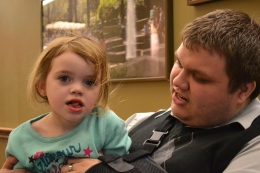 Joe Ciavarella embraces his 3-year-old daughter, Lennon, on campus Tuesday. She is the reason Ciavarella was motivated to attend YSU. Photo by Kacy Standohar/The Jambar.

As Joe Ciavarella reads a bedtime story to his 3-year-old daughter at 8 p.m., he wraps up a busy day of work, classes, Play-Doh and Barbie dolls.

The 25-year-old said that even though his daughter is the reason he’s back in college, he is exactly where he wants to be: at home.

Joe Ciavarella is a full-time stay-at-home dad and a full-time Youngstown State University student studying early childhood education. He has been the primary caregiver in his family for almost three years, but recently took a 25- to 30-hour-a-week job at West Corporation, where his wife works about 40 hours a week.

He said she still makes more money than he does, but he gets to spend precious time with his daughter.

“Before she was born, I wasn’t going to go to college. But when my wife told me she was pregnant, I sat down and thought about it,” Joe Ciavarella said. “I wanted to give her a better life than what I had growing up, so I fell back on my second passion, which is teaching children.”

Joe Ciavarella resides in Niles with Emily, his wife of three years, and his daughter, Lennon.

“My wife is a hippie who loves the Beatles,” he said.

“People just assume you’re lazy and that you don’t want to work, but it’s not that,” Joe Ciavarella said. “I cook, I clean and I do all the shopping for her.”

He said the best part about being a stay-at-home dad is getting to spend time with his daughter.

“It’s definitely a good feeling being able to stay at home with, her and be a part of the enrichment process. I get to hang out with her and have fun,” he said. “I get to be a kid again with the adult responsibilities.”

Joe Ciavarella said a lot of dads are disconnected from their kids because they’re always working.

A regular work day for Joe Ciavarella involves dropping Lennon off at preschool in the morning and going to work. Then he’s on dad duty for the rest of the day, leaving little time for himself.

His wife leaves for school before either Joe Ciavarella or their daughter wakes up.

“We get up around 8 a.m. and get breakfast,” Joe Ciavarella said. “I give her a bath and do her hair and everything. Then I pick her up at 3:30 p.m. She normally goes to bed around 8. Being a dad is, like, my full-time job and then some. You got doctors’ appointments, and you have to know what they’re doing at all times.”

Emily Ciavarella doesn’t get home until almost midnight, and she also attends YSU full time as a nursing major. Her schedule doesn’t allow her to make her daughter breakfast in the morning or tuck her in at night.

The typical responsibilities of a mother fall on Joe Ciavarella.

“By the time she gets home, Lennon is already in bed,” he said. “I wish she [Emily] could be a stay-at-home mom because I know how much she misses it.”

Emily Ciavarella stayed home with her daughter for six months after Lennon was born.

“Sometimes it is relaxing, but after a while, I start to miss her,” she said.

Joe Ciavarella said there are downfalls, though. When they are all together on the weekends, Lennon yearns for her mother’s attention, and Joe Ciavarella said he sometimes feels shunned after spending so much time with his daughter during the week.

But, for him, it’s still one of the best feelings in the world.

The Ciavarellas rely on the support of their family and each other.

“We have a great support group, and I guess that’s the biggest thing about both of us being in college and working full-time jobs,” Joe Ciavarella said.

Still, Joe Ciavarella faces criticism every day, but said the experience has been memorable.

“It has also opened my eyes up more to what a stay-at-home mom actually does,” he said.

In between being a father and an employee, Joe Ciavarella said he tries to make time for his studies. He brings Lennon to one class on Tuesday.

“With both of us going back to work, it has cut down daddy-daughter time,” he said.

Joe Ciavarella said he decided to take on another project amidst his busy life. He is conducting a survey regarding gender bias in advertising.

“Items like Jif peanut butter and Wuggle Pet toys have advertisements that are geared toward mothers,” he said. “As a primary caregiver, that bothers me. Because, if I’m doing all the shopping for food and toys, I’m not going to buy your product if it’s geared towards mothers only.”

“My biggest thing is that I actually lost friends over it because of my views,” Joe Ciavarella said. “They think I’m being sexist about it.”

Gender bias in advertising is something Joe Ciavarella said he hopes to change, but has experienced little success thus far. He started a Twitter account specifically for the survey, but has received little response.