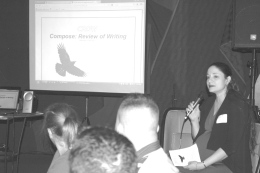 Youngstown State University students were honored for their accomplishments in writing at the release party for Compose: a Review of Writing, also known as CROW, at the Lemon Grove on Monday.

The new YSU English Department publication features selected writings by composition students; they were judged under anonymity (for both students and their instructors) and selected by composition instructors, Composition Placement Test readers and YSU Writing Center tutors. At least two reviewers evaluated each submission.

“We really needed a way to recognize really excellent student writing, and [this] was an interesting and spontaneous idea that was a good way of doing that,” said Angela Messenger, coordinator of the YSU Writing Center.

Some of the students recognized were passionate writers, while others were simply completing class assignments.

Dubos, a sophomore, said his essay was the first one of his college career. He said the freedom to write how he pleased helped foster his creativity.

“Writing is something I’ve always liked to do, but when it’s a class assignment, you generally don’t have a lot of freedom,” Dubos said. “For this assignment, I experienced much more freedom, and that’s why this essay took off the way it did.”

Cover, on the other hand, said he does not like writing.

“It was just an assignment for class, so I gave it a shot and was that much more surprised when my essay was picked,” Cover said.

The Lemon Grove was selected for the CROW event because of its dedication to the arts, as well as its involvement in the community, Messenger said.

This is CROW’s first year, and Messenger said she plans to continue the publication annually.

“For our first go-around, I thought everything went very smoothly,” Messenger said. “Everyone seemed to be enjoying themselves, which is the point [of the event].”

She said students have already submitted work for next year.

“In the future, we’d like to see a broader range of projects,” Messenger said. “The sky’s the limit for work a student can be proud of and submit.”

Karen Kotrba, an English instructor at YSU, said she hopes to build off of the momentum of the event.

“The committee did a great job, and I think more students will want to contribute more and more,” Kotrba said.

Students may submit works completed in English 1539, English 1540, English 1550/1550 Honors, and English 1551/1551 Honors. Assignments completed during the summer and fall 2012 semesters or the spring 2013 is eligible. Any graded assignments — such as essays, reading responses and PowerPoints — may be submitted to composeYSU@gmail.com.

The submission deadline for next year’s CROW is June 1.