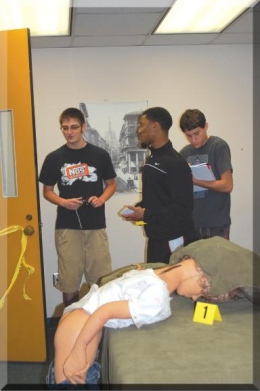 Students John Disch, Josh Rivers and A.J. Kissos examine a victim in the crime scene condo on Wednesday afternoon. They are required to number and photograph the evidence, assess the scene and make a determination as to what happened. Photo by Kacy Standohar/The Jambar.

Josh Rivers, a junior majoring in criminal justice, approaches the sturdy yellow door of an office in Youngstown State University’s Cushwa Hall. The frame is crisscrossed with yellow caution tape when he enters the bedroom and finds a half-naked figure bent over the bed and stabbed in the neck.

It looks like a rape and murder scene. “But we don’t want to make any assumptions yet,” Rivers said. “We still have to gather as much information as we can.”

The scene is a simulation used to give students in the forensic science investigation course a hands-on experience.

The department of mathematics and statistics moved from Cushwa Hall to the Lincoln Building, leaving space to be used for crime scene re-enactment scenarios.

The office space was transformed into a five-room condominium, complete with a kitchen, bathroom, master bedroom, child’s bedroom and living room.

Susan Clutter, assistant professor of forensic science at YSU, said the department has tried in previous years to find a dedicated space. She said a basic laboratory space wasn’t going to cut it in the world of crime scene analysis.

The classes were previously forced to use hallways, the Cushwa Hall lobby area and spaces outside.

Clutter said she felt that it made students uncomfortable working on a fake crime scene in public.

“Sometimes it’s laughed at, and sometimes it scares people,” Clutter said. “I think people thought there was a real crime that had occurred.” She said the private space is beneficial because it doesn’t offend or scare anyone anymore.

“We tend to set these bodies up as if they don’t mean anything,” she said. “We’re looking at it as a scientific experiment, but if we were to take these same bodies and throw them onto the front lawn of Cushwa, it takes on a whole other connotation.”

Although the department worked diligently to use the Thompson-Sacherman House on Lincoln Avenue, Clutter said it would have cost hundreds of thousands of dollars to renovate the building and remove lead used in the older paints.

Joseph Mosca, dean of the Bitonte College of Health and Human Services, decided the former department of mathematics and statistics would make an effective crime scene condo.

Clutter also worked with YSU’s re:CREATE program, in which old furniture from one department is given to a department in need.

“But we’re a can-do department,” said Patricia Wagner, chairwoman of the department, as she commended the staff’s creativity. “The condo is a great alternative for making due with the university’s scarce resources.”

The condo will also be used for first responder training.

It was designed to be a multiple-use space in case the classes should ever set up a mock mass shooting or chemical spill. Clutter said she hopes students in the classes will respond, clear the dangers, and start to document and recover evidence from the scene.

Clutter said the condo will serve as a realistic, hands-on experience for students, providing them with a variety of scenarios in classes such as crime scene investigation, fire arms investigation, trace evidence examination and forensic laboratory.

“The problem is the reality. Unless you actually walk into a crime scene, it’s very difficult to have a picture or video,” she said. “We’re adding all of the scientific curriculum in with our training. Hands-on training is easier for the students to learn, but it’s also easier for us to teach instead of showing PowerPoint after PowerPoint of photos.” YSU is only the fifth university in the U.S. that has a dedicated crime scene space, Clutter said.

“We’re cutting edge as far as that goes,” Clutter said. “We’re trying to prepare students for graduate school or a start in the workforce.”

On Wednesday, students in forensics science CSI used the condo for the first time. Students were split up into groups and told to investigate a particular room in the condo. Groups photographed and marked evidence with number cards.

Sophomore Cody Sankowski said she was excited to be on scene and had anxiously awaited the condo’s completion.

“Knowing that I’m actually getting started into what I’m interested in doing was the best feeling,” she said. “You want to make sure that you get every detail because it is detrimental to your case.”

The new space has been beneficial for safety reasons as well. Clutter recalled an incident when her students were doing a mock rape scene investigation behind the Beat Coffeehouse on Lincoln Avenue. She said students found materials that were not planted for the mock scene, which were dangerous to pick up with bare hands.

“We really had some sensitivity issues. The Beat Coffeehouse is clean, but we went in the back, and one of my students found a pair of boxer shorts and a used condom,” Clutter said. “That’s problematic when you have students finding things that they’re not supposed to be finding.” Robert Wardle, assistant professor of criminal justice, said he thinks it was a safety hazard to introduce students to a fake crime scene outside.

“We don’t want contamination, and it’s much better in a controlled environment,” Wardle said.

Clutter said she thinks students will soon wonder how the classes operated without it. She said misconceptions about this job are often direct results of watching unrealistic shows such as “Law and Order,” “NCIS” and “Criminal Minds.”

Clutter and Wardle said they hope the experience will show students how much time it takes to work on a crime scene and recreate some of the emotions that come into play.

“This condo gives students a firsthand experience, rather than the first day in the workplace,” Wardle said.