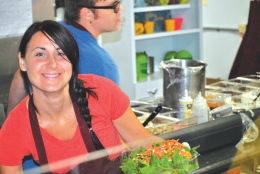 “I wanted to be able to provide portable foods that are made fresh as an alternative to fast food,” Verde said.

Her landlord approved the installation of solar panels on the roof to power her two restaurants. Verde is now applying for a grant to fund the installation and is hoping that the new roof being installed on Wednesday will not derail her plans.

In five months, Soleil Cafe went from a dream to a reality for Verde, who also owns Coyoacan.

The 35-year-old signed the lease for the space behind Jimmy John’s five months before Soleil’s grand opening.

In 2007, Verde began classes at YSU, and she graduated just a few weeks ago. While she planned and prepared her new restaurant, Verde also switched from being a part-time to a full-time student. Friends took over running Coyoacan to help. Verde realized she wanted a crepe place in Youngstown after various visits to other cities with French cuisine.

Verde used Facebook to choose the final name and crepe recipes. She provided the options and let popular vote do the rest.

“There wasn’t even any strong attachment,” Nathan Stauffer, manager and long-time friend of Verde’s, said about the final name.

Stauffer is one of Verde’s many friends who were recruited in preparing the new restaurant. He quit his previous factory job to work with Verde full time to renovate the building three weeks before its opening.

“It was just a cement box pretty much,” Verde said about the building’s previous condition.

Students are still discovering Soleil Cafe, despite the posters hung around campus. Alexis Millerleile, a junior accounting major, visited Soleil for the first time on Wednesday with her friends.