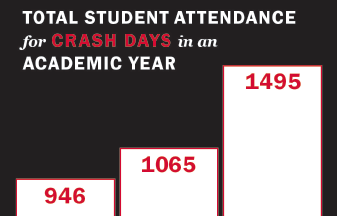 Youngstown State University hosted a Crash Day event on Monday, Feb. 16. It was YSU’s most attended spring Crash Day to date, despite freezing temperatures and ice buildup on campus. Previously, the most successful Crash Day in the event’s history was back in November.

Crash Day is an opportunity for prospective students to tour the campus and interact with school employees, including President Tressel. The university has hosted the event several times a year since 2012, and they’ve increased in popularity over time.

February Crash Days tend to draw fewer attendants than the November version, as many prospective students have made a decision regarding their college futures by that point.

“An open house program such as Crash Day is an opportunity for [students] to get to do a lot of interaction with a lot of different people all in one day. … It’s just a nice opportunity for them to see everything that YSU has to offer them as an incoming student to the university,” Hubert said.

Susan Davis, director of undergraduate admissions, also helps to organize Crash Day. She said she believes that speaking with current students is an important experience for prospective students.

“[Current students] are the ones who are going to be able to tell them what to expect if they come to YSU,” Davis said. “They can give them tips and share some things that they’ve learned over the years being here at YSU. Talking with current students at the program is definitely a vital part of the program.”

Davis also said she believes that Crash Day is important for helping students find their fit at a university.

“I think students have to be able to come to the campus and experience it, specifically while classes are in session and everything is going on, and get a feel for what it’s really like,” Davis said. “I’m not a big advocate of students applying to universities and enrolling at them without at least being on campus and interacting with the faculty. The biggest part of it is that a student can examine whether they are a good fit with the university.”

In addition to its informational value, Hubert said she believes that students find the experience entertaining.

“When students get to campus and see everything that YSU has to offer, in terms of opportunities — academically and socially — in the campus setting, they really enjoy their time here,” Hubert said.

YSU hopes to expand on its success as it looks forward to its next Crash Day in June.