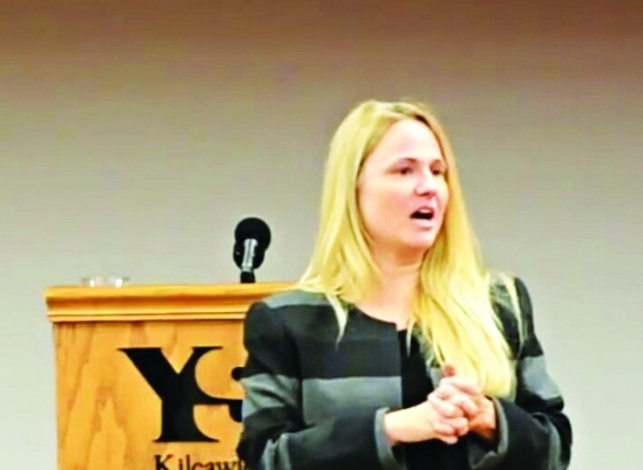 Last Lecture is a semiannual event hosted by the Student Government Association in which professors or administrators answer the question, “If you could give students one final lecture, what would you tell them?” The speakers are nominated by SGA’s Academic Affairs Committee and voted on by the student body.

Cossentino recounted a number of struggles she has dealt with in her life and explained how they presented opportunities for personal growth. She said she learned this from her late father.

“Growing up, I became aware of how my dad went through something very difficult but turned it around to make it positive,” Cossentino said.

As a child, Cossentino struggled with a medical condition that caused her to frequently break out in hives. It led to her being cut from the cheerleading squad in fifth grade. She doubled down and started playing basketball and softball, excelling at both.

“This is how powerful a message is when somebody tells you [that] you can’t do something,” Cossentino said.

She worked through these issues and made it to adulthood, even though doctors suggested that wouldn’t happen.

In college she bounced from major to major before finding a home and a mentor in the psychology department. She stressed the importance of nurturing relationships with advisers.

“People can help to open a door for you that you may not be able to open, but you’re going to have to walk through that door,” Cossentino said.

Cossentino decided to pursue a Ph.D. while working and raising a child. When her adviser became ill and told her he needed her dissertation in a month, she said her 6-year-old became her cheerleader.

She said her son asked her what she was doing one night as she took her contacts out and got ready to go to bed.

“He said, ‘Missy, your adviser needs to retire, and he is sick. You need to go back, get those contacts in and get this written,’” Cossentino said.

She said students should build support systems and accept feedback without taking it personally.

As an adult, she continued to struggle with health problems. Heart problems led Cossentino to pursue a plant-based lifestyle and eliminate animal proteins from her diet.

She said she questioned what doctors told her and thought critically without relying too much on others.

“We are individuals, and what is right for one person may not be right for another,” Cossentino said.

Her independence was challenged when she broke both hands in a recent car accident.

She said while students are healthy they need to be preparing for the worst while they hope for the best.

“If you spend time investing in other people, when it comes time to make a withdrawal, you can,” Cossentino said.

The last challenge she discussed was the death of her father, a figure she described as larger than life. He was an athlete who served in the Navy and worked for General Motors.

She said her father was very giving of his time, and even in his last hours as he helped her with some of her work.
“He was still trying to find purpose in life, even at the end of life,” Cossentino said.

She closed the lecture by passing bells out to everyone in attendance. When Navy Seals retire they ring bells three times — it’s called ringing out.

After everyone received a bell, she instructed attendees to focus on their support system and remove the paddle from the inside of the bell.

“This is your commitment to yourself that you’re not going to ring out,” Cossentino said. “I want you to think about every time something is miserable. Put it into perspective, and don’t you dare ring out.”

Jacob Schriner-Briggs, executive vice president of SGA, introduced Cossentino. He said the lecture got to the crux of who she is as a person.

“A lot of the message today, and one she gives to people whenever they meet is one of resilience,” Schriner-Briggs said.