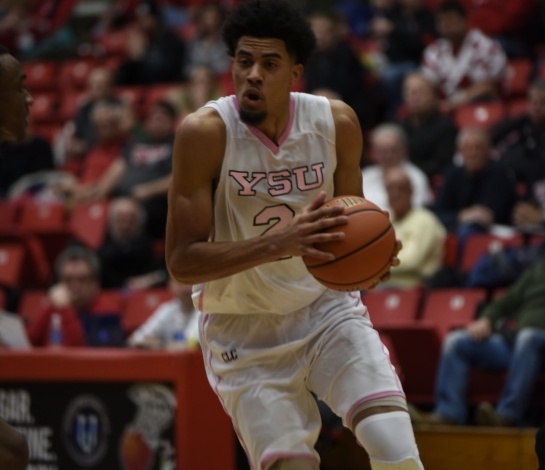 The Youngstown State University men’s basketball team (10-15, 4-8 Horizon League) will look to end their two-game losing streak against the University of Illinois-Chicago (12-12, 5-6 HL) on Feb. 9. This will be the second game between the Penguins and the Flames this season.

“We turned the ball over too many times,” YSU head coach Jerry Slocum said. “Clearly we have to take care of the basketball. We have done a pretty good job and actually played a little better on the road. In league play we are 2-3 on the road and 2-5 at home. It’s a game that if we play well, we will have a chance to compete and win.”

Slocum also said that effort has been the major inconsistency for this team lately.

YSU junior guard Francisco Santiago agreed with Slocum and said that he was disappointed in the team’s inconsistency as well.

“We will win a game and have an opportunity to string a few together and put ourselves in a good situation,” Santiago said. “We will put all our effort into one game, then come out the next game and we aren’t as focused. We’re not as energetic. We’re not as excited to play the game. That’s when the losses start coming in bunches.”

Santiago also said that the team’s lack of effort has been frustrating at times over the last few weeks.

UIC averages 77.8 points per game while being the best 3-point shooting team in the league at 38 percent.

“It gets frustrating because I would do anything for those guys on the team,” Santiago said. “I would run through a wall for them no matter what. There are games where they are right there with you and everything is great. There’s games like these past two and you are just sitting there and really don’t have an answer.”

Santiago said that the team is capable of a lot and that for him, losing is frustrating when they don’t live up to the potential that they know they are fully capable of.

Santiago scored 8 points against the Flames in January, but was 3-11 in shooting and had five turnovers. He said that he feels responsible for the loss, but is looking forward to making up for it this week.

“Personally, I felt like I gave that game away here at home,” Santiago said. “I didn’t play well; I had five turnovers that led to a lot of baskets. I’m going to look to be better, more aggressive and play better defensively. I’m going to do whatever it takes to get us a win.”

UIC guard Dominique Matthews has been one of the most consistent players on the Flames, averaging 12 points per game off the bench in the conference. He scored 21 against the Penguins earlier this season and is coming off of a 23-point performance in UIC’s 105-100 overtime win against the University of Wisconsin-Milwaukee.

UIC’s Tai Odiase is one of the Flames most important players, averaging 7 rebounds per game and 2.8 blocks per game. He’s also the third-best shooter in the league at 58 percent.

Penguins’ guard Cameron Morse scored his third career 40-point game against the Flames this year. He’s the second-best scorer in the league at 22 points per game.

After YSU plays UIC on Feb. 9 at 8 p.m., YSU will then travel to league leaders Valparaiso University for another 8 p.m. tipoff on Feb. 11.