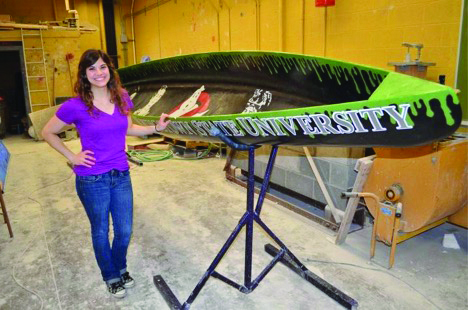 Members of the American Society of Civil Engineers organization at Youngstown State University competed at the Ohio Valley Student Conference — hosted by Cincinnati State University and the University of Cincinnati — in Lawrenceburg, Indiana on March 26-28, placing second in the concrete canoe competition.

Miranda DeFuria, a sophomore studying mechanical engineering at YSU, is the concrete canoe team captain and vice president of YSU’s chapter of ASCE.

“The canoe has to be made within the academic year, so we will usually start around September,” DeFuria said. “We work on the mix design, our hull design and do analysis with those first. We did mix designs probably until December and then we placed the concrete shortly after.”

“I was a little nervous going into the competition, considering this was my first year as captain,” DeFuria said. “We also had new paddlers who had never practiced in a concrete canoe because of the winter weather and frozen lakes in this area. I was also very excited for regionals because I had attended OVSC last year just for the experience and I really enjoyed it. I was ready to see our canoe actually in the water.”

The canoe was painted green, baring the faces from the stars of the film “Ghostbusters.” The canoe came in at 20 feet long and 30 inches at its widest point. The canoe was 3/8 of an inch thick and was 13 inches high at its tallest point.

The YSU team is advised by Anwarul Islam — chair of the department of civil, environmental and chemical engineering — and is helped by two former team captains, Adam DePizzo and Nathan Knapp.

“It was such a rewarding experience to see the canoe at competition because of the amount of time and work we put into this project,” DeFuria said. “We placed second overall at regionals, meaning we did not qualify for the national competition in June.”

Aside from competing in concrete canoe, the YSU team also participated in a miniature steel bridge competition, but was disqualified after the bridge failed to hold the minimum of 2,500 pounds. The group’s bridge collapsed at around 2,300 pounds.

“It was strange to think that we were done for the year because we worked so many months on it,” DeFuria said. “I am very proud of my team and am so thankful for everyone that made the canoe a success. I love this project and cannot wait to see what the team will do next year.”