The trudging of soles made their way past the finish line in downtown Youngstown’s Federal Plaza at the 43rd annual Youngstown Peace Race Sunday.

Hundreds of participants competed in the run and walk competitions for prizes. Registration fees and money raised were donated to the Rescue Mission of the Mahoning Valley.

Participants were shuttled at 7:30 a.m. to Kirkmere School where they began their race through Youngstown, Mill Creek Park and finishing in Federal Plaza. A free 200m kid’s run was also held during the event.

Finishers held one another’s hands crossing the finish line and embracing their supporters on the sidelines with smiles on their faces.

The Youngstown Peace Race was founded by activist and runner Jack Cessna in 1975. The event started as a 25k race with a 10k race added in 1978. Today, the event holds a 10k run and 2-mile walk. 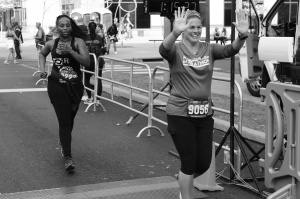 Competitors with diverse backgrounds have come to compete in this USATF-certified race course for the past 43 years. Allie Anderson, a graduate and former cross country and track runner for Walsh University, competed in the event, finishing second in her 20-24 age group.

Although taking a top place for the race, Anderson said she has a unique running background.

“I was a gymnast my whole life and once I was done with that I just picked [running] up,” Anderson said.

Since her departure from gymnastics, Anderson has been running for six years, eventually making her way onto Walsh University’s track and cross country team. She said she has competed in the Youngstown Peace Race for a number of years.

“Since I stopped running track and cross country in college, I just like running competitive races,” Anderson said.

Runners weren’t the only ones helping make a difference in the Valley. Volunteers from nonprofit organizations and workplaces joined in to help raise money for the Rescue Mission and organize the event.

Sarah Bowers, an employee of the Youngstown YWCA, said she first heard of the peace race through her work and decided to lend her time as a volunteer. She said she plans to be involved in the event again.

“I think it’s about having everyone come together in the community and volunteering and running and being just all together, especially with everything going on nowadays with race,” Bowers said. “I would definitely say it’s a great event for that.”

Youngstown State University students from the cross country team and the Honors College took part in both running and volunteering as well.

Kennedy Romeo, a YSU honors college student who volunteered at the event, said her family runs in the Youngstown Peace Race regularly.

“I have cousins that really love running and also I’m in the honors college so we have to volunteer,” Romeo said.

This was also Romeo’s first year volunteering at the event, but said she plans on coming back next year to help out.