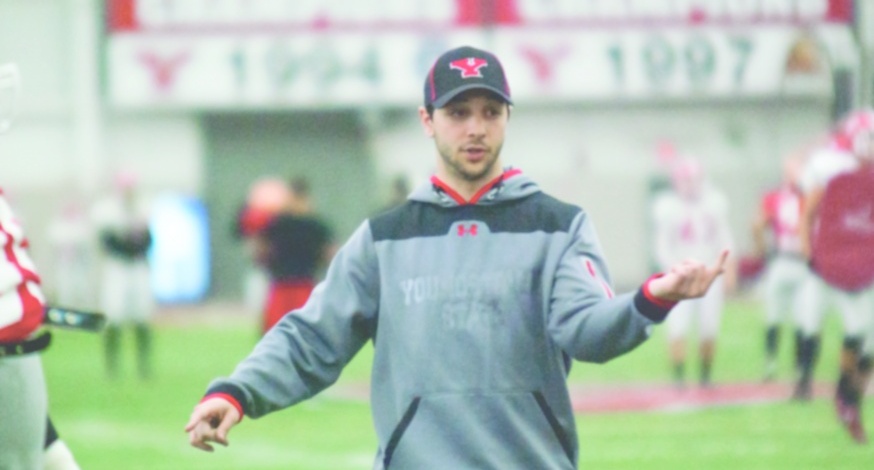 During his time as the starting safety on the Youngstown State University football team, Donald D’Alesio excelled on the field as a “coach on the field.”

D’Alesio was a graduate assistant on the football team since his playing career ended following the 2014 season.

Now he’s taken on a new role, the new YSU defensive line coach. D’Alesio received the promotion before the start of spring practice. 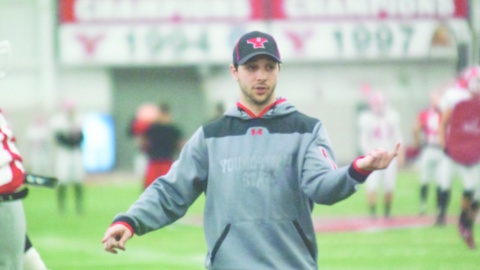 “I came here with the intention to work hard and do what was needed. I thought I was going to work with the defensive backs last year. When I got here, and coach Carl Pelini approached me to work with him on the defensive line — just to learn something new,” D’Alesio said. “I was all for it. I’m open to kinda anything, and I’m always trying to learn. It was a step, that I thought would help me as a coach.”

D’Alesio said Pelini helped develop his understanding of the defensive line. Even though D’Alesio is in charge of the D-line, Pelini still helps D’Alesio when needed.

“He’s a guy I still go to. He still helps me out with any questions I have or anything I wonder about,” D’Alesio said. “He’s great with me and answers any questions that I have. He’s great to work with.”

Since D’Alesio recently graduated, he still coaches players that were on the roster when he was a starter. Even though he was a defensive back, he said he had a number of friends on the team that played at different positions.

He said that it’s easier to coach the players that he played with because “I got a great group of guys on the defensive line,” and the team is aware that he’s a coach that deserves their respect.

“Some of the guys, I was really close with when I played. Now I’ve grown into the role. It’s good that I’m able to relate to those guys at that level,” D’Alesio said. “I just kinda went through the things they’re going through.

“So when they’re having a rough day, or they really don’t feel like going to practice — I’ve been there before. I’m able to kinda see it with their demeanor. I can tell them ‘Hey, pick it up today’ or whatever it may be. I think it helps me being able to relate to those guys. Some of them I’ve played with. It’s not weird, but it’s just funny that I kinda came full circle.”

D’Alesio is a graduate of Cardinal Mooney High School, which plays at Stambaugh Stadium. He’s established a history at YSU and is looking to improve the team and help develop the defensive line.

“This place is special to me, and I came here for a reason. Obviously, the four years I played here were great,” D’Alesio said. “We accomplished some things we wanted to do, other things we weren’t able to accomplish. I think coach Bo [Pelini] has done a great job with this program, and I think we’re moving in the right direction. It’s very special to me that I’m able to start my career here with this coaching staff.”