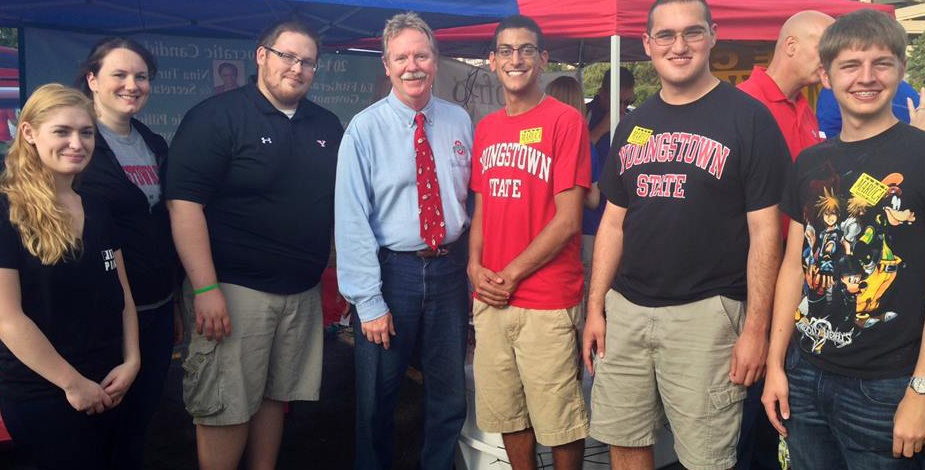 With the upcoming election on the horizon, the Youngstown State University College Democrats are re-establishing themselves on campus.

Ernie Barkett, a freshman economics student, is taking on the role of president for the newly re-formed College Democrats. He said he has been involved politically for several years and intended to join the organization prior to enrolling at YSU.

“When I heard it wasn’t there, I was the first one that asked to re-charter it,” Barkett said.

Jordan Wolfe, a member of the previous incarnation of the College Democrats, said the number of people showing up to meetings began to dwindle following the 2012 presidential election.

“By the end of the [fall] semester, there were about four people left with the president, who was supposed to graduate, being one of the four, which then left three other people in the group to take over the exec,” Wolfe said.

Wolfe said other responsibilities, combined with the lack of enthusiasm from the group’s members, kept him from taking on the role of president, and the group fell apart as a result.

The College Conservatives re-formed last year, but in Barkett’s opinion, the university was lacking representation on the other side of the aisle.

“We felt that the university needed a progressive voice,” Barkett said.

Mark Stanford, president of the College Conservatives, said he’s hopeful that the two groups will find opportunities to work together going forward.

“In other parts of the state, the College Democrats are very active. I’ve just never been able to energize them at YSU since I’ve been chairman, so hopefully, under Ernie Barkett’s leadership, that will change,” Betras said.

Betras stressed the importance of having young people involved in the political process.

“Historically, young people do not vote in the numbers that they need to vote in. The irony of it is, the decisions that are being made now are things that are going to affect them more than the older people that vote religiously,” Betras said. “We’re laying the foundations upon which all young people are going to have to stand, so they should have a say in how it goes.”

“I believe that us, the youth, we really need to get out and vote. We need to get our voices heard,” Barkett said. “Just getting the youth involved in the political system again, and getting them energized about being able to vote and voting for representatives is important.”

Betras said college students are a natural constituency for the Democratic Party.

“Young people tend to be more liberal than they are conservative, and I think that the Democratic Party is more in line with what we want to do with college funding and things of that sort,” Betras said. “One of the biggest problems facing us is education and how much college education costs, so that’s why college students need to get involved in the process.”

With state higher education funding as a percentage of tuition on the decline at YSU, Barkett said this is a key issue for students.

“We want to keep tuition costs as low as possible,” Barkett said.

He also added that increased funding for the public school system will help bring good students to the university.

Barkett is supporting Ed FitzGerald’s bid for governor this fall, and he said that Fitzgerald’s agenda is more responsive to the needs of students at YSU than Governor John Kasich’s policies have been.

Barkett said anyone interested in joining can reach the group at collegedemocratsysu@gmail.com, or through the student organizations link in the YSU portal.