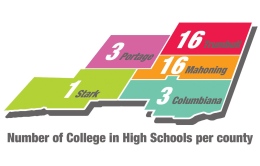 Number of college in high schools per county

Youngstown State University is making it easier for students to graduate in three years and save money on college tuition with programs such as College in High School.

“Rather than having students come down to campus, we certify the teachers at the high schools in certain courses, so that when they teach the students in the program, students are getting both high school credit and college credit as well,” YSU President Cynthia Anderson said.

From 2007 to the spring of 2012, a total of 865 students graduated from the program, and 196 of those students are currently enrolled at YSU.

CHS was originally funded from a $40,000 grant under the Ohio Board of Regents House Bill 115 in 2007. Going into its seventh year, CHS can provide significant savings on a prospective student’s tuition.

“It’s a huge mission in the Valley,” Krodel said. “When a high school student earns college credit early, they are more likely to go to college, stay in college and graduate.”

Krodel said 25 percent of students enrolled in CHS are coming to YSU when they graduate, and CHS holds a 92 percent retention rate.

“They are retained like nobody else,” Krodel said. “Many are honors scholars or involved in the STEM leadership academy.”

In its inaugural year, the program enrolled 56 students.

Marla Carano, CHS program coordinator, said a mixture of 396 high school juniors and seniors were in the program from 2011 to 2012.

Krodel said she expects that number to grow to 550 this year.

“We started to see really highly qualified students there that meet our admissions criteria,” Krodel said. “They became a very natural fit.”

Originally, CHS was geared toward students majoring in science, technology, engineering and mathematics, with classes like chemistry and calculus.

“We have increased the number of STEM majors and added a lot of STEM courses in the program, but it’s not just for science-oriented people anymore,” Krodel said. “We have liberal arts, foreign language and English courses.”

The school district provides books, instructors and a classroom. The student pays a flat fee of $49 per credit hour to YSU.

Steve DiMuzio, a chemistry teacher at LaBrae High School, teaches Chemistry 2 for CHS and said the program betters the students in the school.

“These are the better students who have survived Chemistry 1,” he said. “It gives them opportunity where they might not have done it before. CHS might relieve some of their nerves because these students are more familiar with their high school teachers.”

The program also gives students a chance to access their grades and assignments through the campus portal. All credit that high school students receive will transfer to any Ohio public college or university.

“Sometimes students who are very academically advanced get nervous and don’t want to hurt their GPA or valedictorian status, but when they realize they can do it, the worries are being dispelled,” Krodel said.