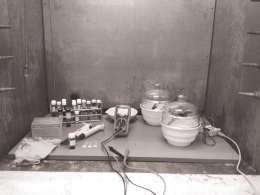 In a workstation in Ward Beecher Hall, Pedro Cortes, an assistant professor of civil and environmental engineering, tests nanosensors that may one day be able to detect trace amounts of anthrax or explosives in the air. Photo by Sarah Thomas/The Jambar.

The engineering and biology departments at Youngstown State University are working to develop technology that may be able to detect small traces of anthrax or explosives using nanosensors.

The nanosensor consists of nanotubes made of carbon with amino acid links. These are connected to an electric current, which detects the presence of a compound by measuring any disturbance in the current. If a compound interrupts the current, it will cause a change of voltage. The change in voltage causes an indicator, such as a light bulb, to signal the presence of the agent.

The use of amino acids makes the nanosensor highly sensitive. Amino acids have binding sites that are able to specifically bind the target molecules.

This ability renders the sensor useful to the military, SWAT teams or the U.S. Department of Defense. The sensor could even be used to detect microbes in food shipments.

Pedro Cortes, an assistant professor of civil and environmental engineering at YSU, is the project’s principal investigator.

Cortes recruited Diana Fagan and David Asch, both associate professors of biological sciences, to assist him in finding the proteins needed to create the sensor.

Amino acids are the building blocks of proteins. The identification of the proteins associated with the target compound will allow for the synthesis of the amino acids needed to make the sensors.

Fagan locates the protein using a phage display library, which is a collection of viruses that each have a different protein on the surface that will be tested for the ability to bind to the molecule of interest.

Once the protein is located, the DNA that coded for that particular protein is given to Asch, who sequences the DNA. The characteristics of the protein coded by the DNA are determined using bioinformatics, computer analysis of the DNA. Xiangjia Min, an assistant professor of biological sciences, conducts the bioinformatics.

Then, Cortes engineers the nanotubes.Cortes has been investigating the creation of the sensors for four years. His research began at New Mexico State University, and he’s been working on the project at YSU for approximately one year.

The research is funded by the YSU College of Science, Technology, Engineering and Mathematics, but Cortes said the team is assembling a proposal that will be submitted to institutes such as NASA and the Defense Advanced Research Projects Agency, a government agency that develops new technologies for military use.

“We need enough data to show that we can produce [the sensors] to expand the work,” Fagan said.

Cortes hopes to eventually make the sensor wireless, which is a key development in making it useful to Navy SEALs.

Cortes said the team is just scratching the surface of the technology’s potential.

“The next thing is the blood detection application for Navy SEALs,” Cortes said. “If the SEAL is unconscious, the detector will be able to tell if the soldier is wounded.”

Fagan is working to locate proteins that bind to human serum albumin, the protein found in the highest concentration in human blood. This protein will be bound to the sensor, which will be used to detect human blood.