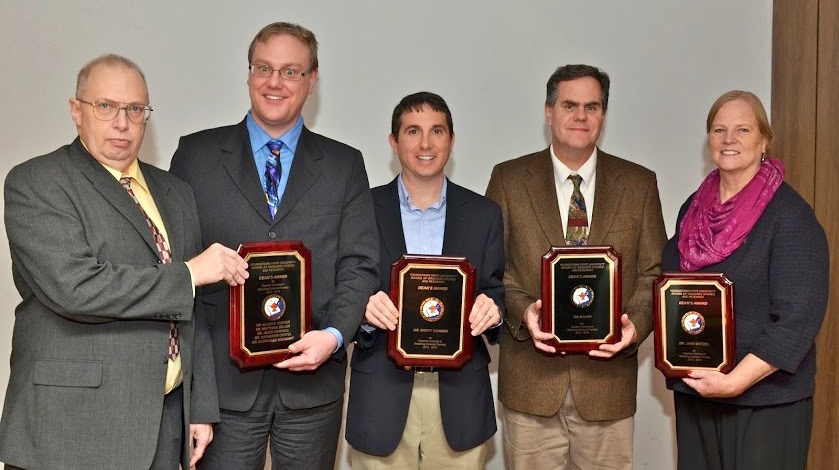 On Wednesday, Nov. 12, Mallinckrodt Pharmaceuticals, a global pharmaceutical company, awarded Jane Wetzel, Youngstown State University associate professor in the department of physical therapy, and Erdal Sarac, a Canfield physician, over $70,000 in a research grant to conduct a study designed to evaluate the effects of a drug treatment on patients with chronic kidney disease who have been on dialysis for less than five years.

Wetzel said that Sarac contacted the university’s department of physical therapy with his idea of evaluating the clinical drug trials to patients with kidney disease.

“During that time, Dr. Sarac was looking into an investigator-initiated drug trial. He was attending conferences where the sponsor of our grant was also presenting their product,” Wetzel said. “[Sarac] needed to get an expert to look at how muscles are functioning, strength in general. He came to our department; our department chair sent out an email. He really approached us initially about another trial. It had to do with nutrition and a nutrition supplement, and that sponsor no longer had the competition that they initially had. In that trial and any trial that looks to improve, the status of someone with kidney failure, there is always going to be muscle weakness.”

Wetzel said that the drug treatment going to be administered to patients is Acthar gel, a highly purified preparation of adrenocorticotropic hormone.

“So I know in order to fund research, I would need to look at a drug trial for anything on a larger scale,” Wetzel said. “With any clinical research, you need a team of people. When you have a good physician who can help you recruit and want to see measures that you are interested in taking happen, it’s a great collaboration. We need St. E’s because we’re going to have all the lab work that needs to be done and they will help us with that part.”

The physical therapy department will perform tests during the trials, which will examine   patients’ abilities to perform therapy tasks along with examining patients’ balance.

Some of these tests include gait speed, leg power tests, strong gait velocity tests and balance.

Wetzel said that the Acthar gel treatment that the team is going to perform with the grant money would not cure chronic kidney disease, but possibly strengthen the patients enough so that they will pass the tests.

“It’s not going to provide a cure,” Wetzel said. “It is something that preliminary trials have shown that milder forms of kidney disease where they aren’t chronic. You have some degree of reversibility, but we can’t make that kind of a promise to anyone. We are also going to research with an unbiased approach so even though we have our suspicions as to how things are going to go, we are trying not to put too much of a slant on exactly what the outcomes will be.”

Wetzel added that these patients would benefit from the treatment and can predict whether or not they are at risk for disability.

BENEFITS OF THE STUDY

“We expect it to benefit the patient because it’s supposed to stimulate the adrenal gland and that should create a better use of protein in the body,” Wetzel said. “Protein builds muscle, and that makes a person stronger and then they are able to pass these tests. … We look at gait speed, balance and specific tests that we know will predict whether or not someone is at risk for falling and hurting themselves, at risk for disablement, and whether they will go into a nursing home or not.”

The trials will take place at the Boardman Renal Group, the Canfield Dialysis Center and a Center for Dialysis Care in Warren.

Pohle-Krauza said that she is monitoring the nutritional aspect of the drug treatment and will assess how the drug will affect how a person’s calorie intake, leading to their body functions.

“As a Registered Dietitian-Nutritionist, I have unique expertise in assessment of diet composition and quality, and of the way in which the body’s composition lean or muscle mass and fat mass or biochemical parameters,” Pohle-Krauza said. “Laboratory markers used to mark nutritional status or other physiologic conditions may change over time, depending on what the person is eating and how much they are moving around. By examining food intake, we can assess the ways in which the Acthar might influence overall intake of calories and of specific nutrients, and in turn, how these changes in intake may affect body composition or other indices of nutritional status — then subsequently, how these changes impact a person’s ability to function.”

Giuffre said that she has been collecting data and assisting others in the research team in writing the pilot for publication. She will also be helping with the strength and physical performance assessments.

“This is an important study because those individuals that are on dialysis long term can have further health issues,” Giuffre said. “Finding a way to help them nutritionally, while maintaining their strength, balance and the ability to be functional in the community, is vital. Several of these individuals are young with families and working, and they need to continue to live active lives.”

Giuffre said that the research grant will predominantly help those patients who are going to be involved in the trials, but it also advances the university further as an urban research institution.

“The benefit primarily is for the patients. We will hopefully impact the lives of those patients locally, but then possibly affect those around the country. This is a first for YSU, as a clinical drug study, which increases our reputation as a research institution. Additionally, receiving a grant like this always helps the researchers in obtaining further grants,” Giuffre said.

Wetzel said that collaboration is one of the positive aspects that result from the grant.

“I think the number one thing that we are getting from this is collaboration between a physician group and the community — between St. E’s hospital, the office of grants and research and the department of physical therapy — and then bringing the students in to see how that collaboration has come together,” Wetzel said. “It’s just not a one- or two-man show. It just can’t happen unless all the stars align, and everyone wants to see it happen.”