The Youngstown City Council met Thursday to discuss the presentation given by design team, MKSK. This presentation included the extensive plans to build the city-owned amphitheater, the addition of a river front park and the revitalization of Phelps and Hazel Streets. 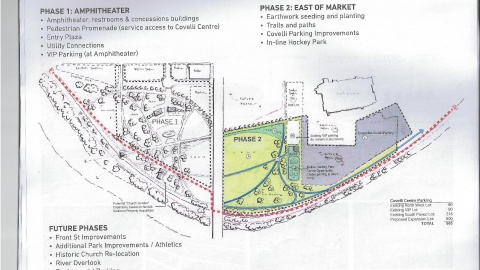 The meeting commenced with Brian Kinzelman, co-founder of MKSK, talking about the project vision and impact.

“We want to develop a vision for Youngstown that is transformational for the city and region,” Kinzelman said. “There is a spectacular opportunity here with great economic development.”

He outlined the presentation with four goals and objectives. The first of these is to create an appealing “front door” to the downtown area possibly across the Market viaduct.

MKSK also has plans to provide locations for street festivals and civic events. He called these planned street improvements “streetscapes”.

One of the mentioned objectives was to strengthen the links to Youngstown State University.

Finance Director Dave Bozanich noted how important getting students down to the amphitheater will be and said he believes this completed project will be successful in that.

“We have a lot of comfort that we can get this done,” Bozanich said. “High quality, low cost entertainment … that’s what students want.”

The streetscape improvements will also contribute to linking the site to YSU.

The other objective and goal is to create a community outdoor amphitheater within a riverfront park.

Kinzelman marveled at the available opportunity, comparing what Youngstown has to Central Park in New York City but on a much smaller scale. He added that there is ample space to incorporate a detailed park featuring trail systems, a river overlook and gardening spaces.

The total seating estimated for the open-air amphitheater is 3,250.

Bozanich briefly discussed the funds and costs of the project. According to him, the project has a $6 million price tag. He estimates the city can raise $3 million alone on sponsorships.

Bozanich said that the river front park plans are already in progress.

“Right now we have 100,000 cubic yards of dirt from the freeway expansion being hauled to the site,” Bozanich said.

He predicted that construction will be underway by the middle of 2017 and wants funding to be raised by the first quarter of 2017.

Mayor John McNally believes this will be great for the community.

“We have the resources to carry this out, and we have university students who will contribute,” McNally said. “It is going to be transformational.”