The City Club of Mahoning Valley held its inaugural event on Sept. 21 at Stambaugh Auditorium with a crowd of about 300 people in attendance. 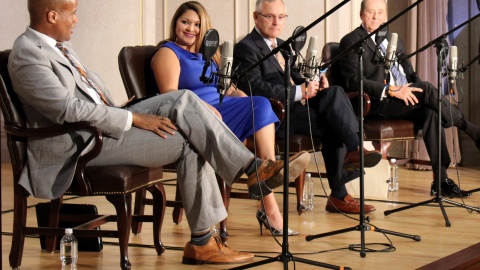 The event consisted of a panel of four regional and state leaders who answered questions on the state of economic development in the Mahoning Valley from a moderator and the general public.

Cafaro, who held office during the recession in 2007, said there was a time when her district was 14 percent unemployed.

“We’ve had such a prolonged economic stagnation that a national recession only exasperated that problem,” Cafaro said.

Although circumstances have improved, Cafaro said it leaves the Valley with questions on where to go from here.

“It isn’t just about tax credits or tax rates or even infrastructure movements,” Cafaro said. “Government cannot solve all of the problems.”

Cafaro said the Mahoning Valley needs to look into public-private partnerships as well as investments in education and ways to make a safe, outdoor community for the public.

“Those are the kind of things that will help maintain the talent that was born here and help attract talent to the community as we continue growth and invest in our area,” Cafaro said.

Tressel said responsibility is a tradition in the Youngstown area that people need to fulfill. He said this is carried to YSU.

“Our major responsibility is the collaboration with everyone in terms of finding the ways, inch by inch, getting better and better,” Tressel said. “Everyone needs to grow that workforce, and it begins way early. It begins much before they get to us, and we have the opportunity to collaborate with K-12.”

YSU collaborates with traditional academic and technical sectors, Tressel said. He continued to say collaborations in Mahoning Valley are necessary for economic development.

“I’m not sure you can do anything great unless you do it together,” Tressel said. “We need to be in a room with everyone else to understand, be aware of and respect the challenges that each of us have.”

Tressel went on to say YSU is collaborating to make the area surrounding campus to be more attractive for visitors to the area.

“Wick Avenue is going to be that cultural mile that this city really wants,” Tressel said.

One of the economic failures for the region was the transition out of the steel industry 40 to 45 years ago, Humphries said.

“We ended up seeing a lot of victims,” Humphries said.

Humphries said people in the area have learned to adapt to these changes, particularly in the auto industry.

“It’s evolution. It’s changing, and we change with it,” he said.

Williams said, while there are many accomplishments to celebrate in the Mahoning Valley, there are still challenges for economic development. One of the steps the area needs to take is to encourage the importance of technical centers.

“For a generation or so, we lost the notion that those were invaluable components for workforce development,” Williams said.

Collaborations between YSU and vocational schools is key to solve this problem, according to Williams.

He said the people of the Mahoning Valley need to consider how they want the rest of the world to view the area.

“We have to make the decision that we’re going to step away from the past things that have defined this region and hold expectations for people who are going to [lead] this region,” Williams said.

The next City Club panel discussion will be held Nov. 14 to discuss the election results and its impact on the Mahoning Valley.