City Club of the Mahoning Valley will be holding its next discussion panel at Stambaugh Auditorium on March 6 to discuss public education in Ohio cities.

This will be the first quarter City Club panel of 2017. Phil Kidd, associate director of YSU CityScape and organizer of City Club, said topics are rotated depending on what is a priority at the time. For this event, he said the priority is education.

“We thought that with so much change happening in public education here in Youngstown, in Youngstown City [Schools] in particular, it was a good time to have a conversation about it,” Kidd said.

Kidd said he expects points of interest in what Mohip has to say, who was appointed CEO of Youngstown School District in June after changes were made to the academic distress commission under House Bill 70. 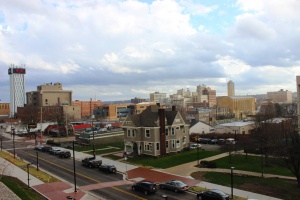 “Now that he has had a full semester under his belt, [it will be interesting] to kind of reflect and see where he thinks things are at, where the opportunities and challenges are, and then what kind of interaction he gets from the audience,” Kidd said.

Mohip said the panel will be a great opportunity to inform the community about public education.

“I think it’s another opportunity to highlight some of the things we’re doing in the Youngstown City Schools specifically to kind of bring back some of the successes this district has had in the past,” Mohip said.

The City Club of Cleveland is the parent organization of the Youngstown division, which started last year. The partnership helped pull in Fowler-Mack, whom Kidd said will give input from Cleveland’s recent changes to public education.

“They’ve undergone restructuring themselves. It’s not the same as Youngstown’s, but it is something in which there was pretty significant changes made,” Kidd said. “There might be some insights she can provide to the larger group here about what things are working.”

Schiavoni attended Cleveland’s City Club events in the past and said he looks forward to discussion that will arise.

“You get the community involved in issues that are important to everybody, and I think that education effects every single Mahoning Valley resident, as well as every resident in the state of Ohio,” Schiavoni said. “I think that affects almost every aspect of life, no matter if you have kids or don’t have kids.”

Topics such as funding and equities, mandates on public schools and charter schools and e-school accountability will likely come up during the evening, Schiavoni said.

Aside from providing a statewide perspective on the issue, City Club gives Schiavoni the opportunity to express his views if he intends to run for governor in 2018, Kidd said.

“[We will be] listening potentially to his platform on public education,” Kidd said. “Where he stands and what are the things he wants to accomplish presumably if he were to become governor.”

Tickets for the event must be purchased by March 3 to attend.

The second quarter event of 2017 will be in June, which Kidd said will be at Packard Music Hall in Warren.

“We want to make sure that we’re representing both Trumbull and Mahoning County with the City Club,” Kidd said.

The theme of the June panel has not yet been decided. Kidd said people can stay updated on City Club events by signing up for the mailing list at www.cityclubmv.org.