Candidates who hope to become the next police chief of the Youngstown State University Police Department spoke to Youngstown citizens and the YSU campus community at Tod Hall from April 4 to April 6.

The three candidates — Shawn Varso, the YSUPD interim police chief; Stephen VanWinkle, captain of Miami University’s police department and Jeffrey Scott, the police chief of the University of Notre Dame — each pitched their ideas and took questions from the audience. 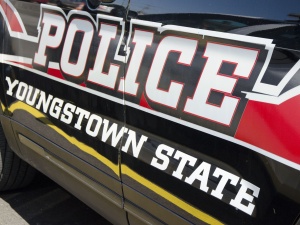 Varso is a familiar face to the YSU community. He has served in the YSUPD for 27 years and said becoming police chief is his dream. Varso, formerly a YSUPD lieutenant, was named interim police chief in April 2016 after former police chief John Beshura was put on administrative leave.

Varso said he wants to create programs where people can learn more about the YSU Police Department, so they can be more accessible to faculty, staff and students.

VanWinkle, captain of Miami University’s Police Department, said he chose to apply for the vacant chief of police position at YSU because the MU and YSU police departments are similar and he wanted to work on a campus with comparable policies and procedures.

“We try to educate before we discipline at Miami University. Students are coming to campus to better themselves; I don’t think anybody there wants to become a career criminal,” VanWinkle said.

“The more information we have, the more informed that we are, the better we can protect the campus,” Scott said.

Each open forum included discussion of how each candidate views conceal and carry on campus.

Carrying weapons on campus is prohibited at YSU, but a law passed in Ohio in March allows Ohio universities to choose whether or not their faculty or students can possess a concealed weapon on campus.

It would be challenging to have conceal and carry on campus, Varso said, because in a situation where there’s an active shooter, it would take more time to identify the perpetrator amongst innocent but armed students.

Scott said he is neutral on conceal and carry, but shared the same concern as Varso.

“When you have people that are not able to identify themselves and they’re carrying guns and there’s a shooting going on … you can’t discriminate what the target is,” he said. “An innocent person’s life could be in jeopardy.”

VanWinkle said he doesn’t see a reason for them being on campus, and at Miami, some students skipped class when their university passed open carry laws.

Each candidate expressed a need for establishing a better relationship with the campus community and showing students how to recognize and prevent being scammed by someone that is hacking the university.